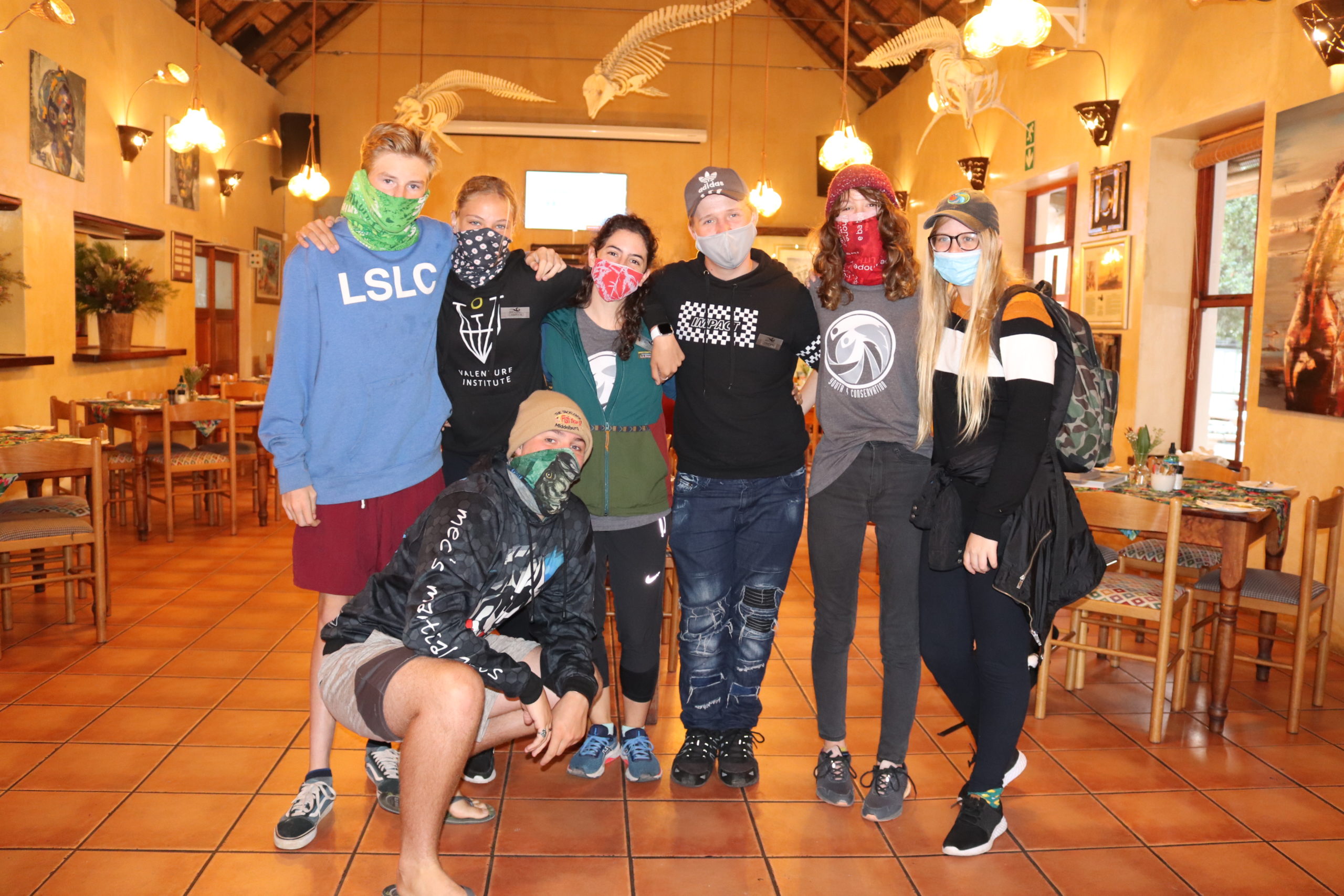 Six South Africa students signed up for the first onsite course offered by Youth4Conservation, in partnership with the Marine Dynamics Academy

The students, aged between 14 to 16, arrived to enjoy a Marine Big 5 trip with Dyer Island Cruises, and marine biologist Sandra Hörbst, exploring the Dyer Island ecosystem. Sightings, as per the daily blog, included a Bryde’s whale, Cape fur seals, thousands of Cape cormorants in flight, and some African penguins. Afterwards, the team chatted with Brenda Walters about how Marine Dynamics award winning eco-tourism model supports the conservation and community objectives, and the students were introduced to the observational data of the various species that the team of marine biologists’ study. Marine biologist Kelly Baker also introduced them to the shark egg project which would be followed up on in the following days. 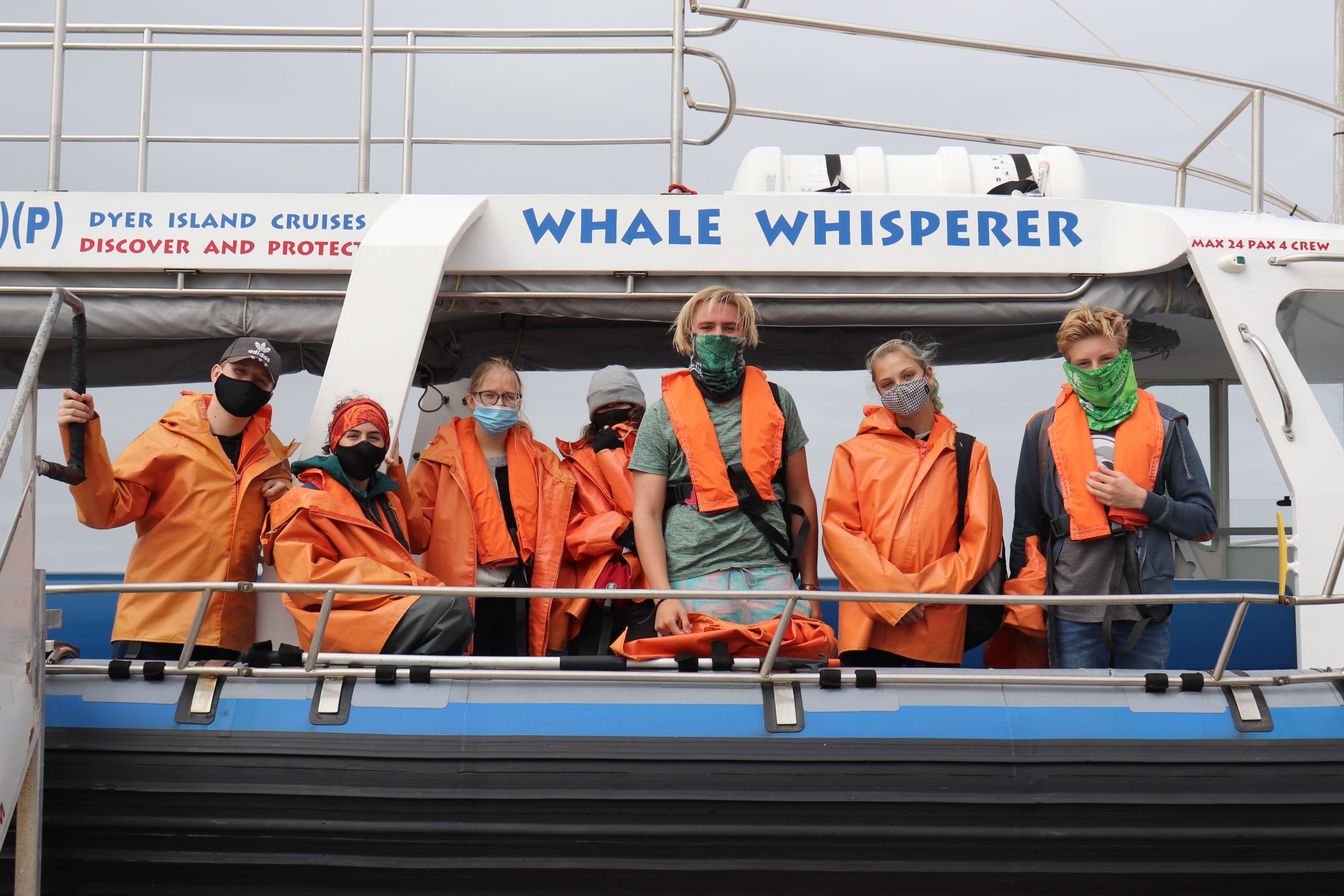 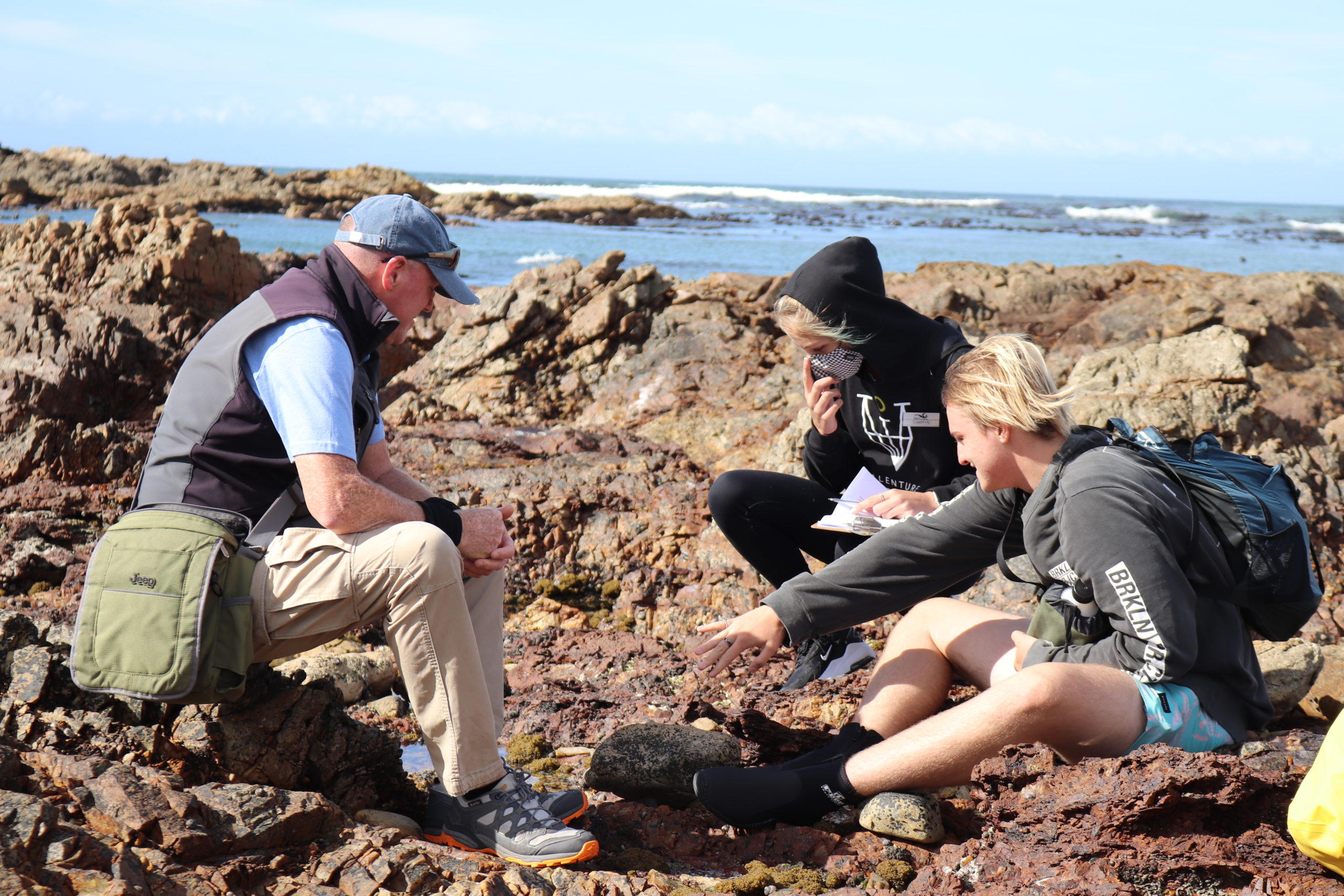 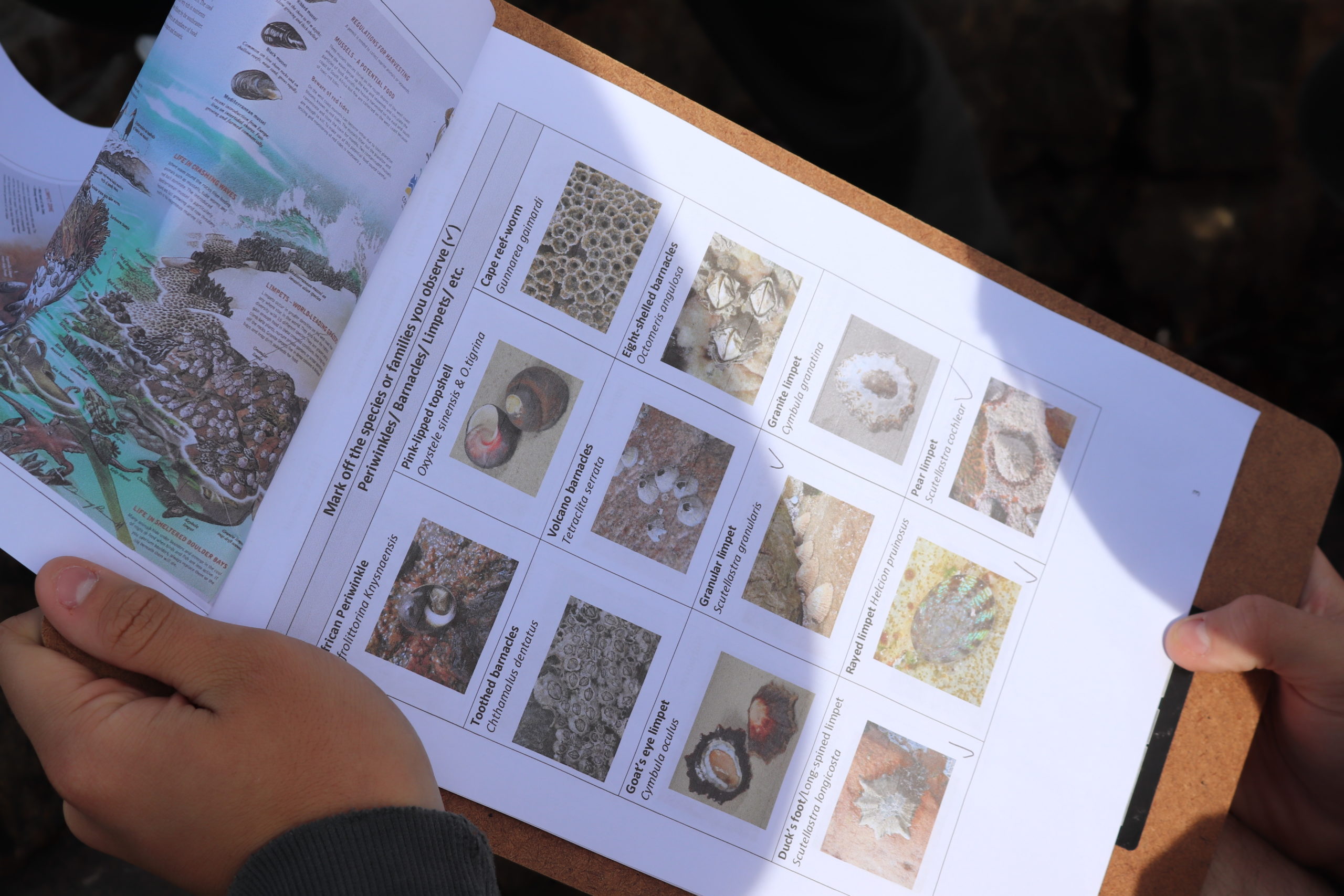 This was followed by a discussion around marine pollution issues and each student made their own fishing line bin with educator Pinkey Ngewu. This project started in 2010 and has grown along the South African coastline. Targeted at fishermen and beach walkers, the bins are strategically placed for the disposal of fishing line with a key objective to minimise impact on marine seabirds and other animals. Each student created an Instagram story sharing a tip on reducing our impact on the marine environment. 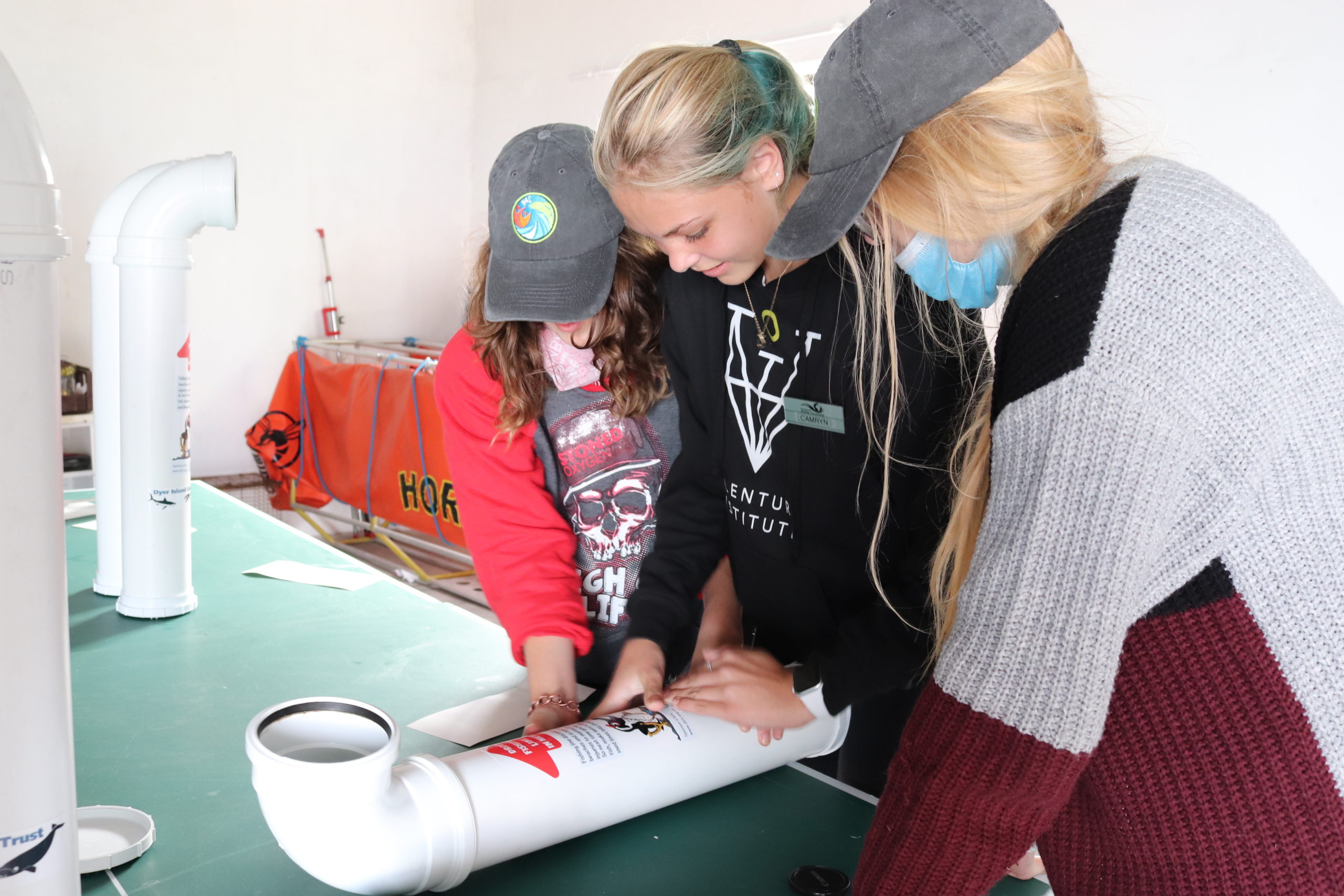 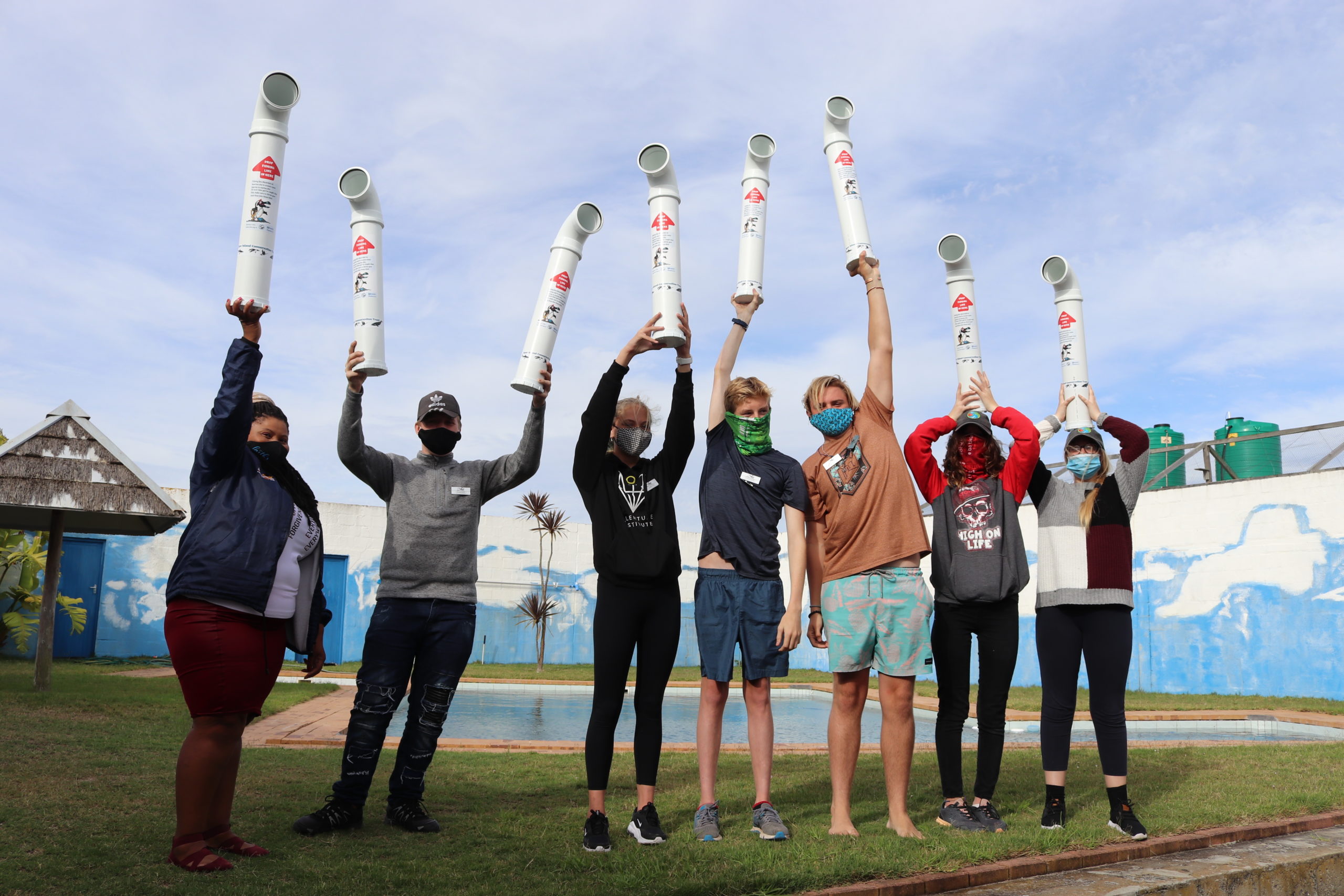 The African Penguin and Seabird Sanctuary was a great hit as the students observed the morning feeding time under the instruction of penguin rehabilitator Xolani Lawo. The issues facing this endangered species were discussed as were the outcomes of returning penguins to Dyer Island to continue breeding. 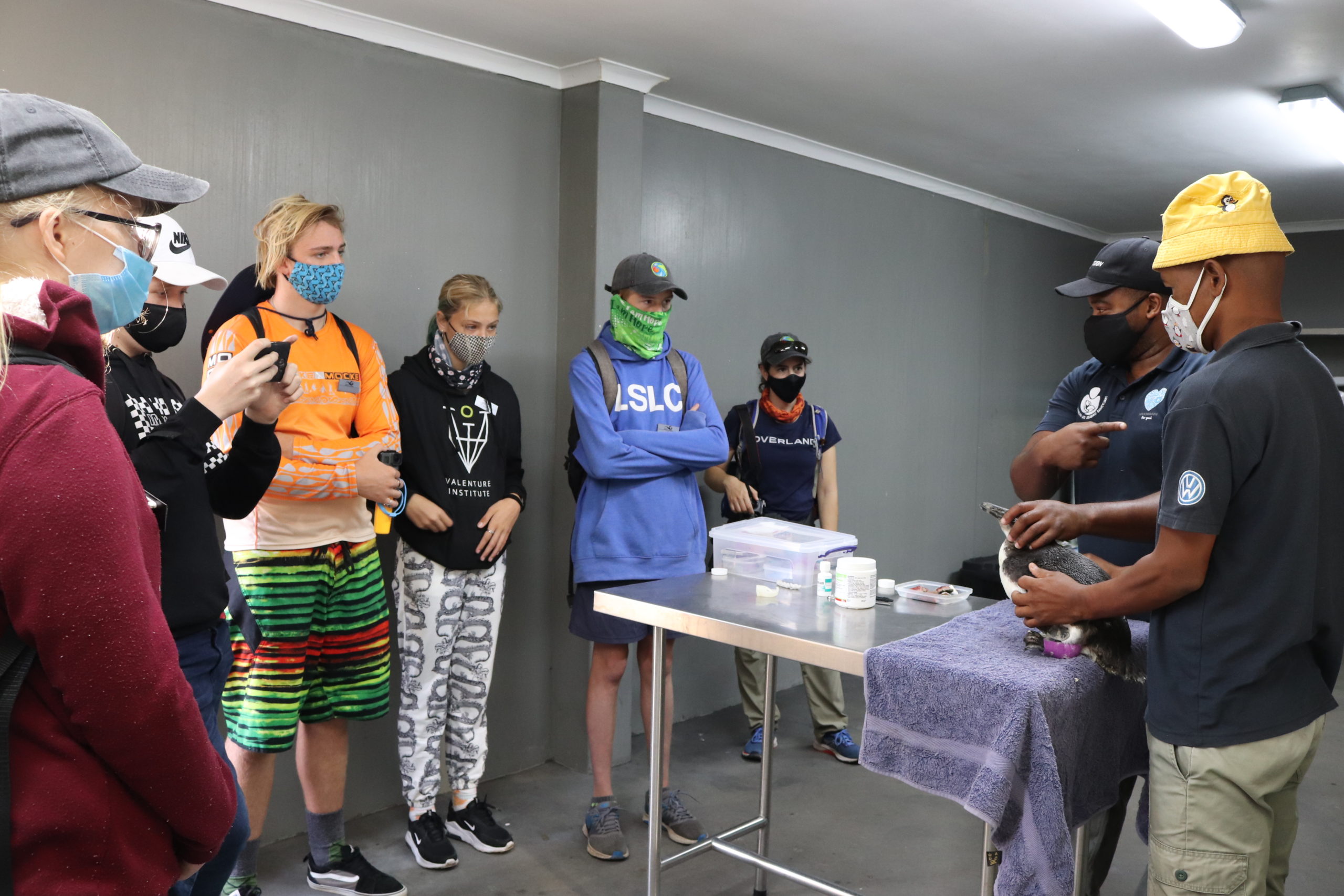 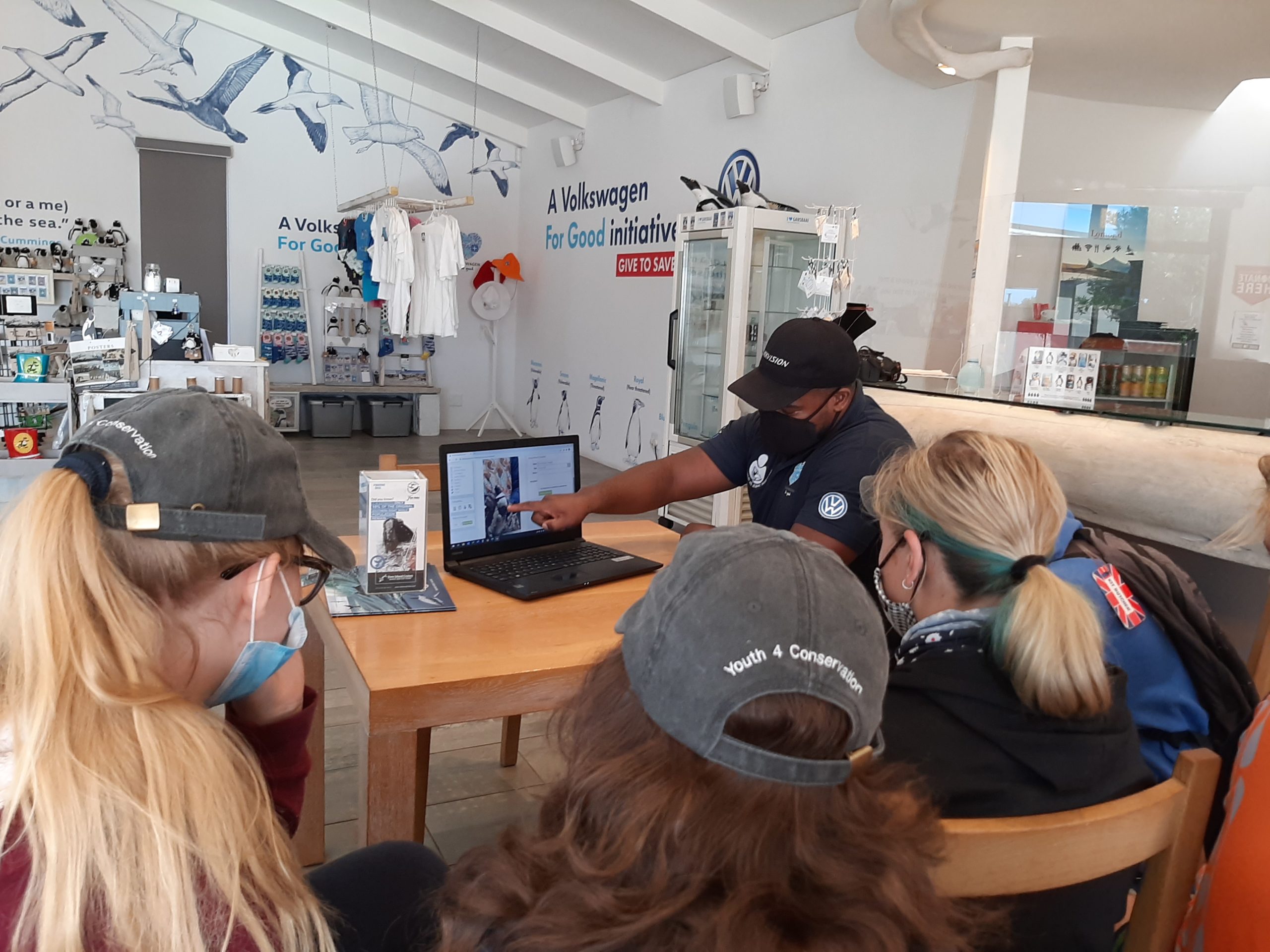 A beach clean-up followed together with the students that have graduated from the Dyer Island Conservation Trust’s three year Environmental Education Programme (DEEP). In all the team collected 14 kgs of waste in a small area, and whilst there viewed the storm drain catchment net project. 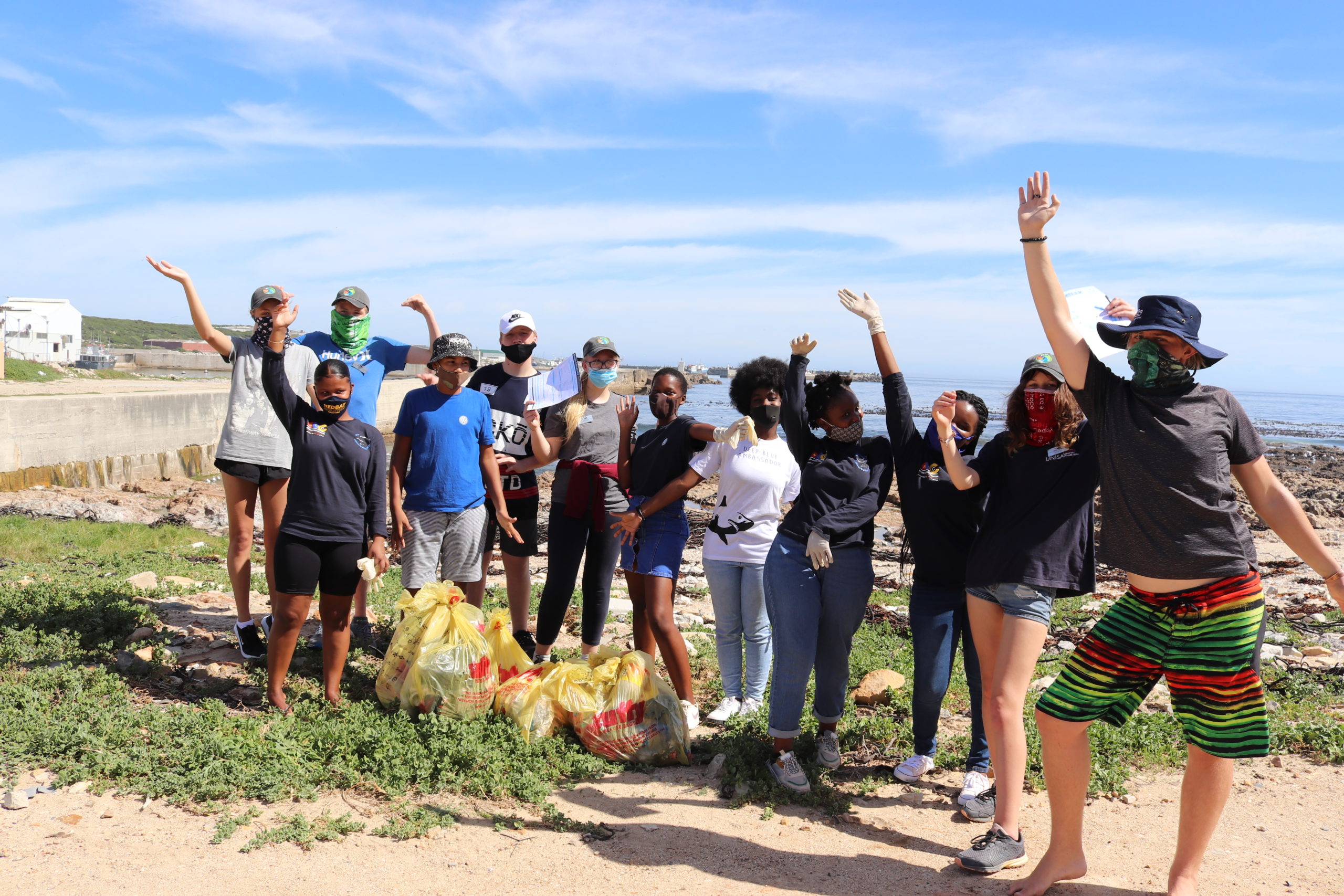 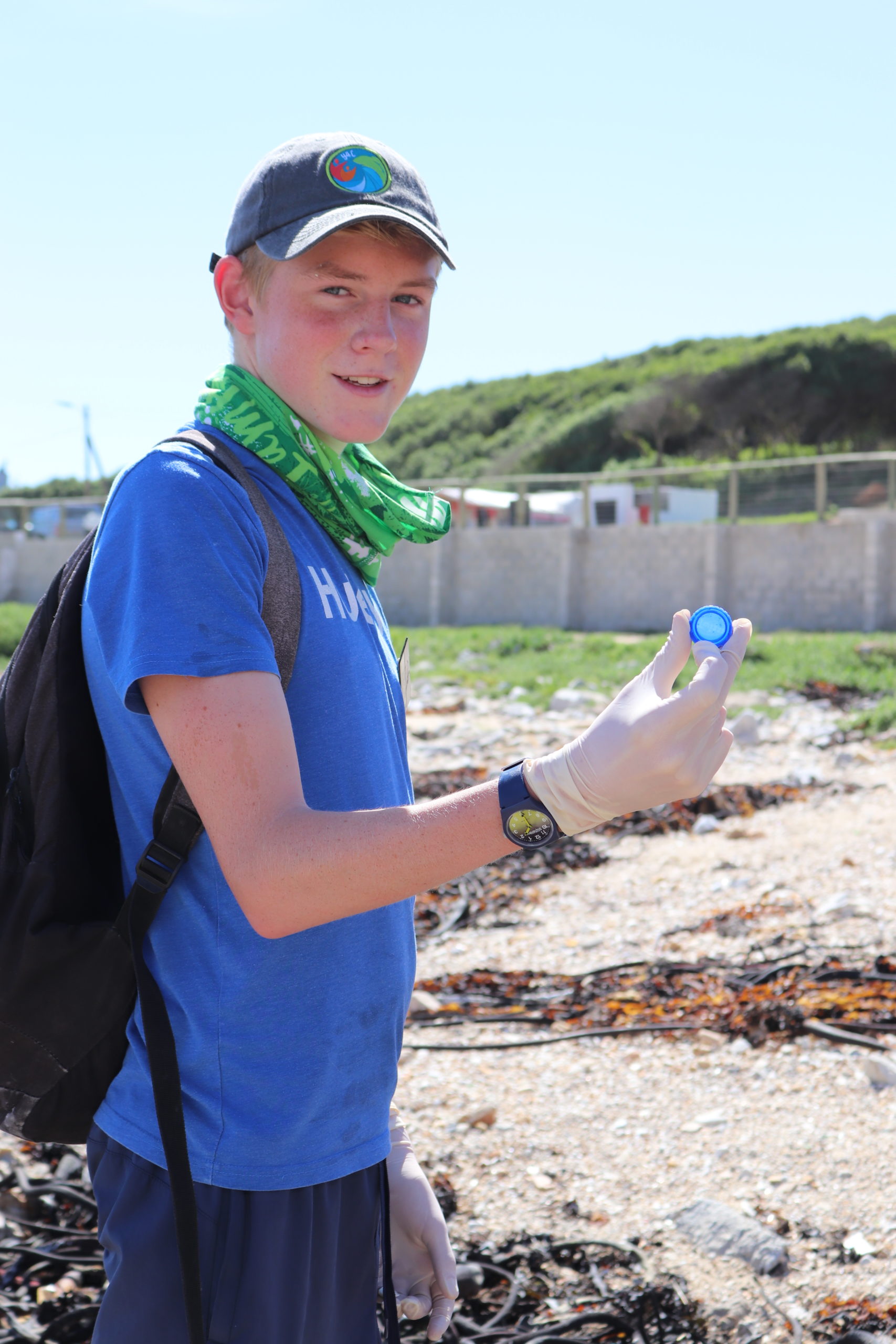 They then headed off for a well-deserved swim at Stanford Cove on what was an extremely hot day. There the students collected some shark eggs, often referred to as mermaids’ purses, for a feedback session on identifying the different species and whether the egg had hatched, been eaten, or had any biofouling. This project helps identify breeding areas of the various smaller shark, and ray species. The students were fascinated with one wherein the embryo had dried out but was still visible. 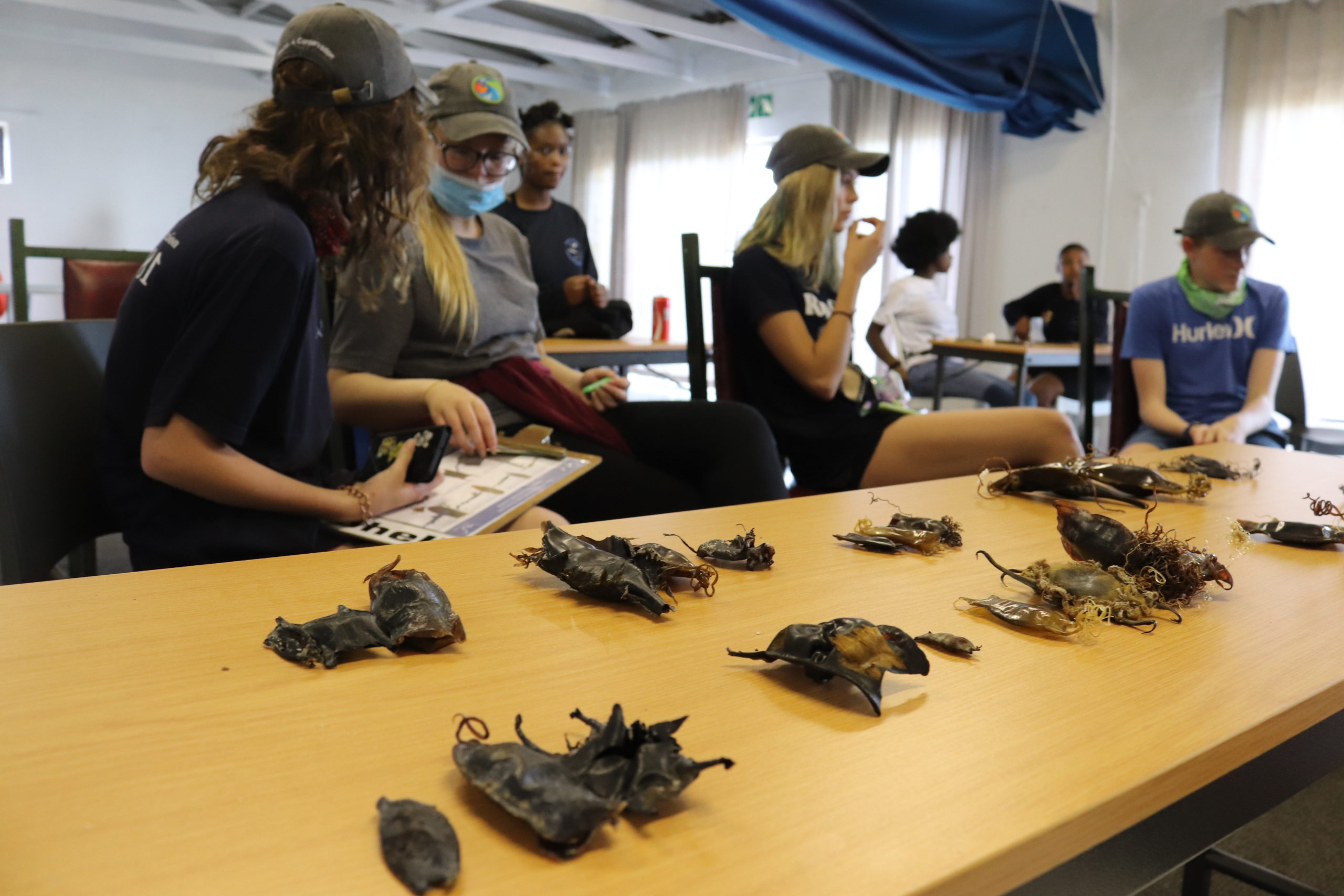 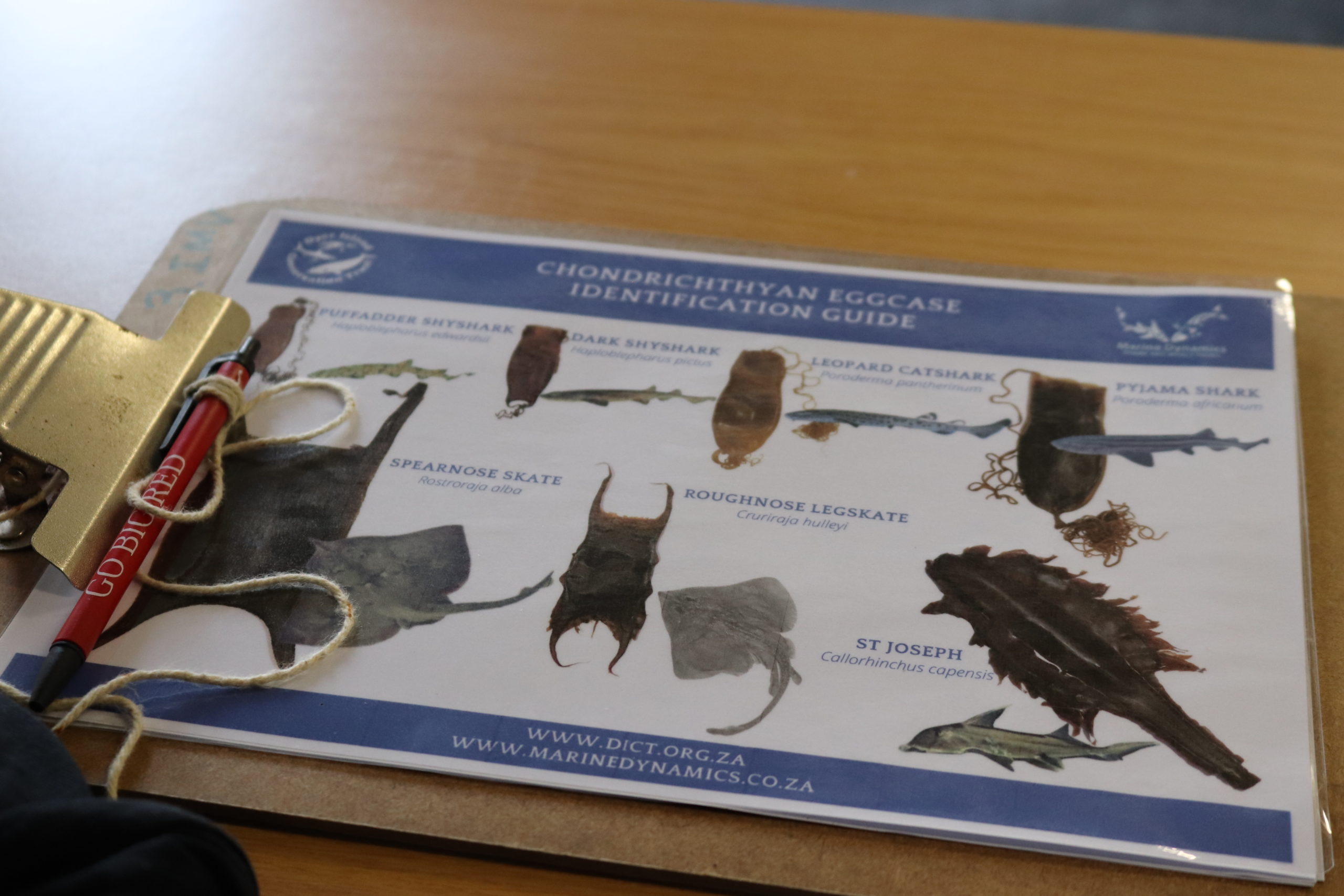 Day four started with a lecture on seabird and coastal birds with Sandra which would be used to help with bird identification later. The tide was perfectly low for a foraging experience with Chef Chris Pead of the Great White House Restaurant – the restaurant did all the incredible catering for the groups stay. It was a marvel to realise that most of what was under our feet could be eaten. The students bravely tried all the items on offer and would get to enjoy them in a whole new way at the evening’s dinner. 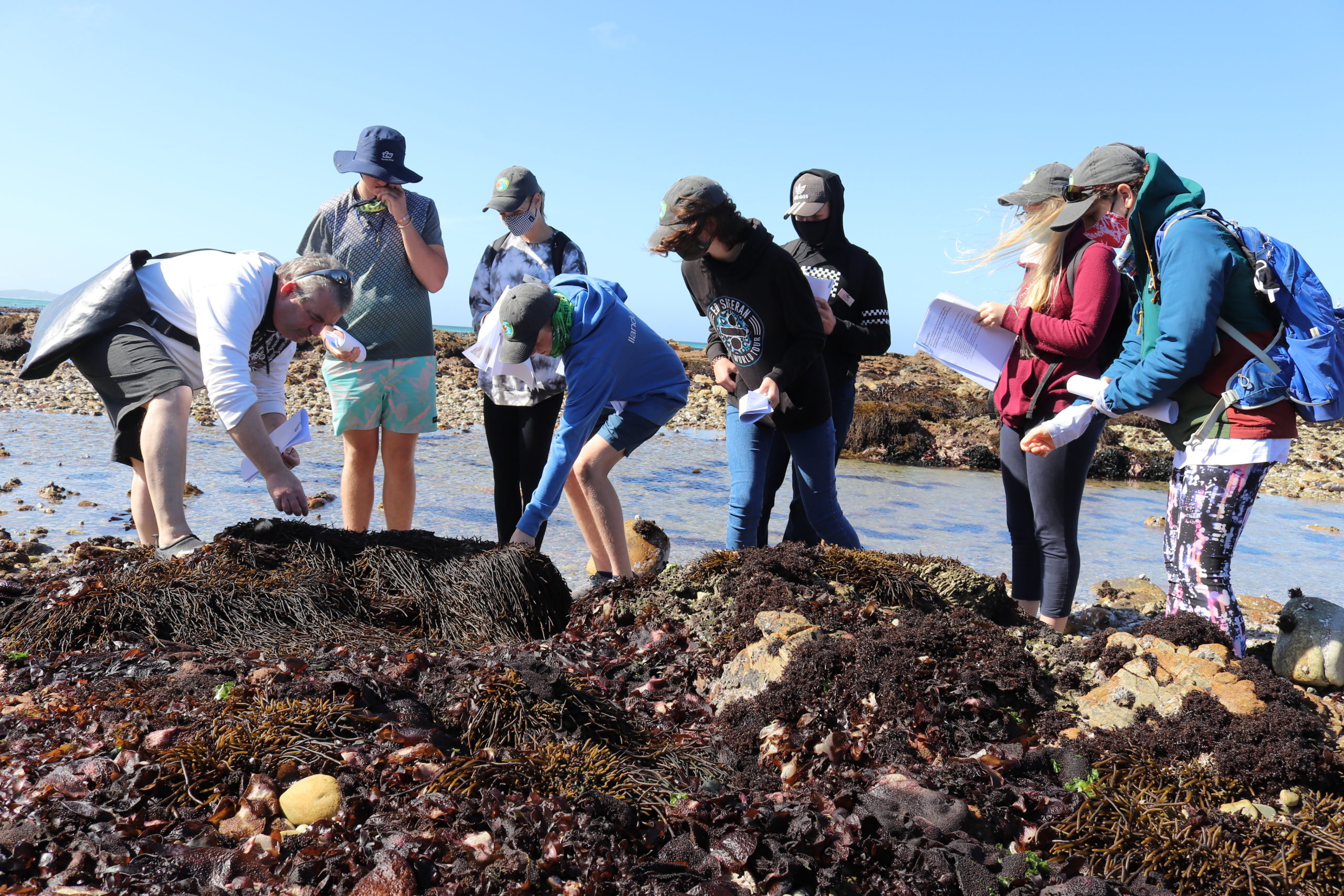 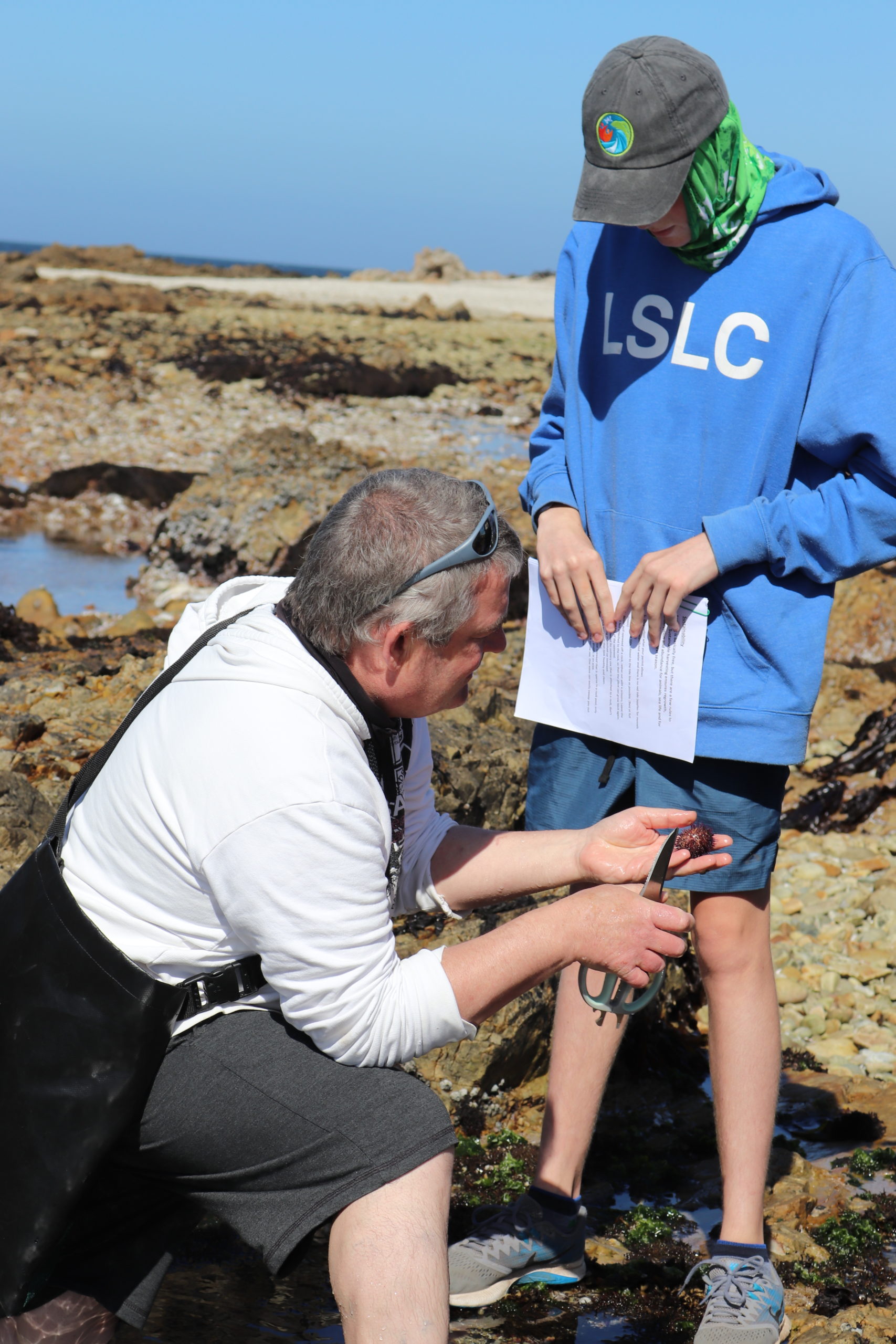 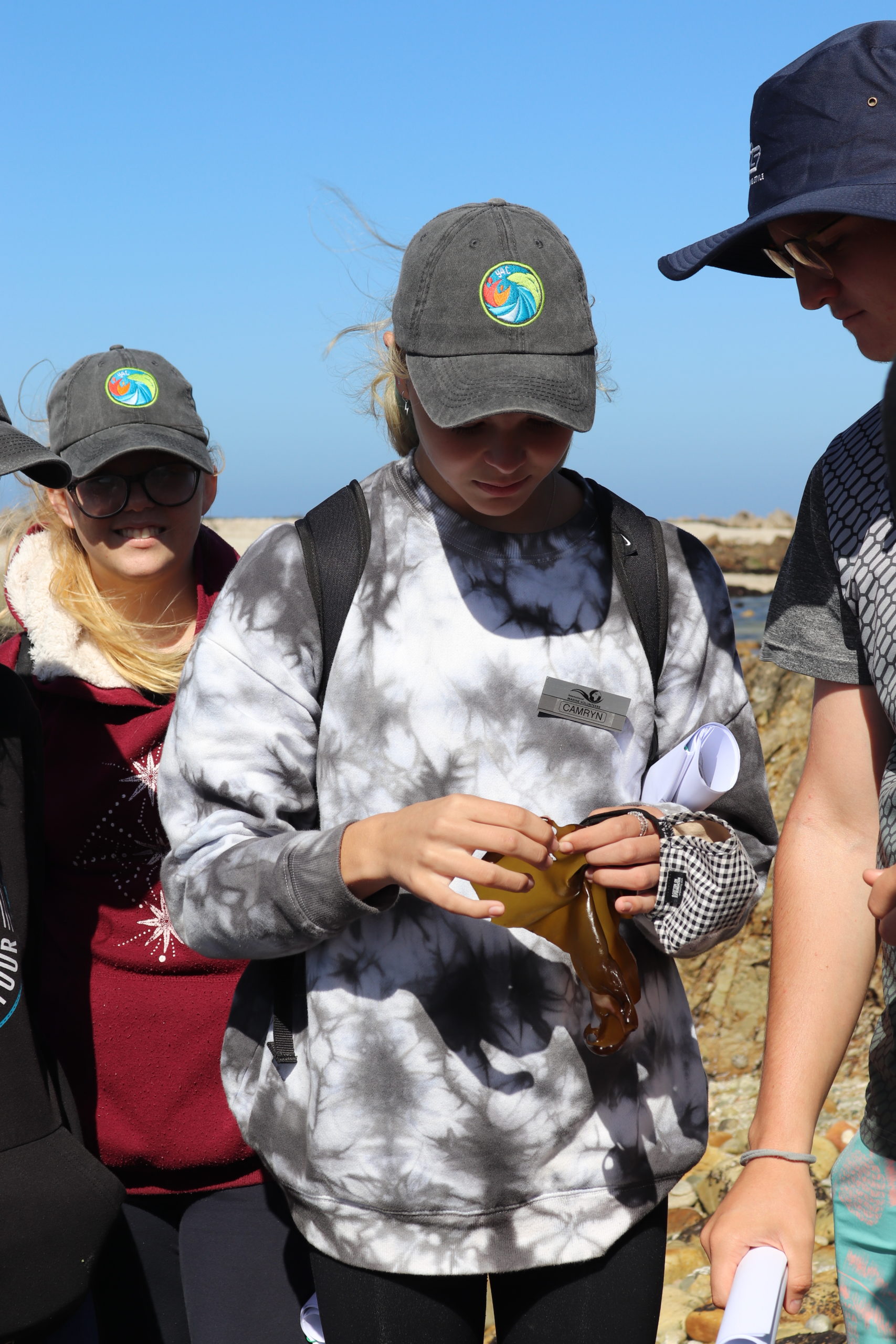 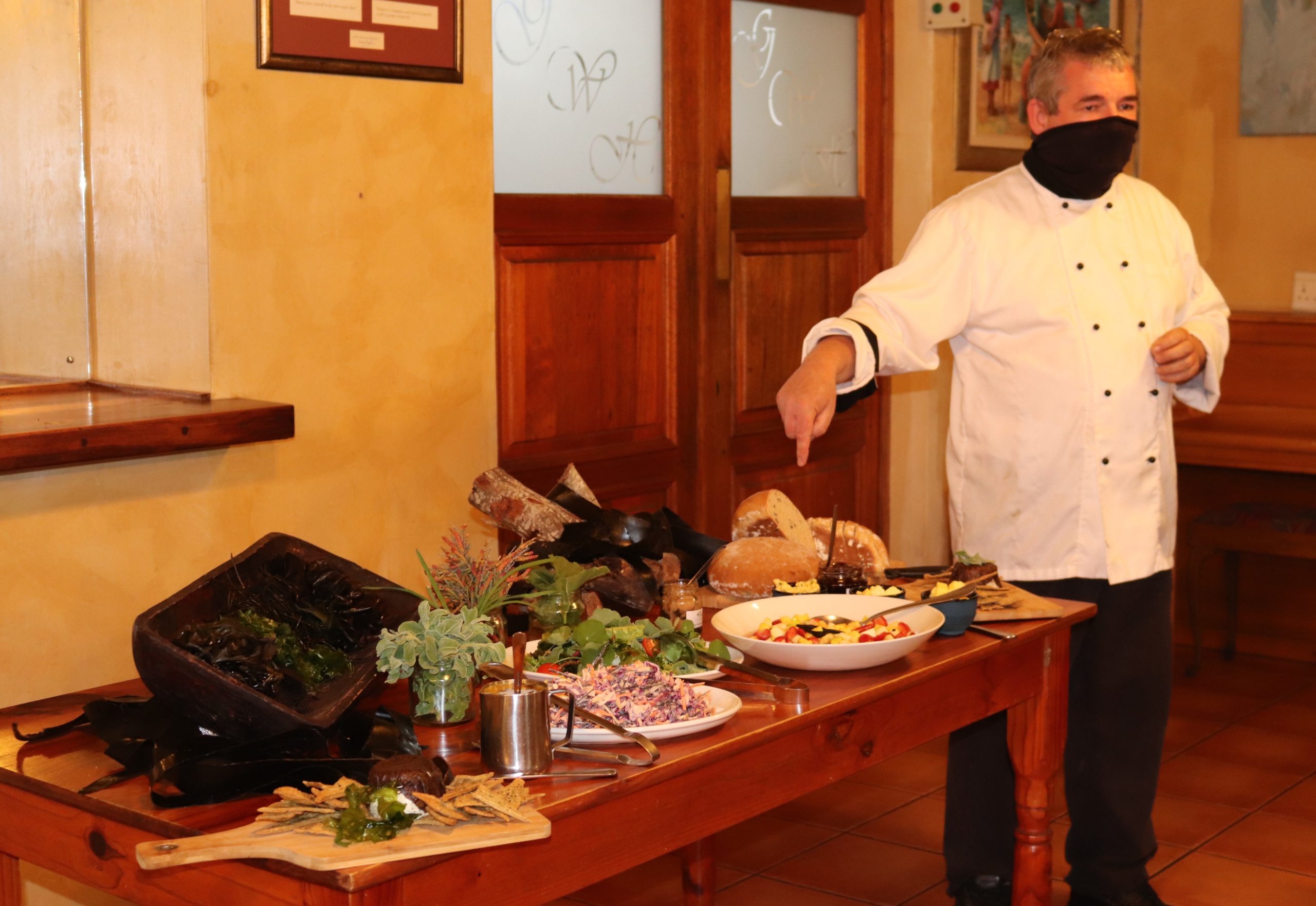 The afternoon kelp dive was long awaited. Two of the Marine Dynamics Academy interns joined and together with biologists Ralph Watson and Ettiene Roets, they tagged several Dark shysharks, giving a scientific angle to the outing. The team works under the system of the Oceanographic Research Institute (ORI) The overall aim is ensuring the wise and sustainable use of southern Africa’s marine linefish resources. Tagging of fish species supports studies of stock identification, migrations, behaviour, age, and mortality rates. 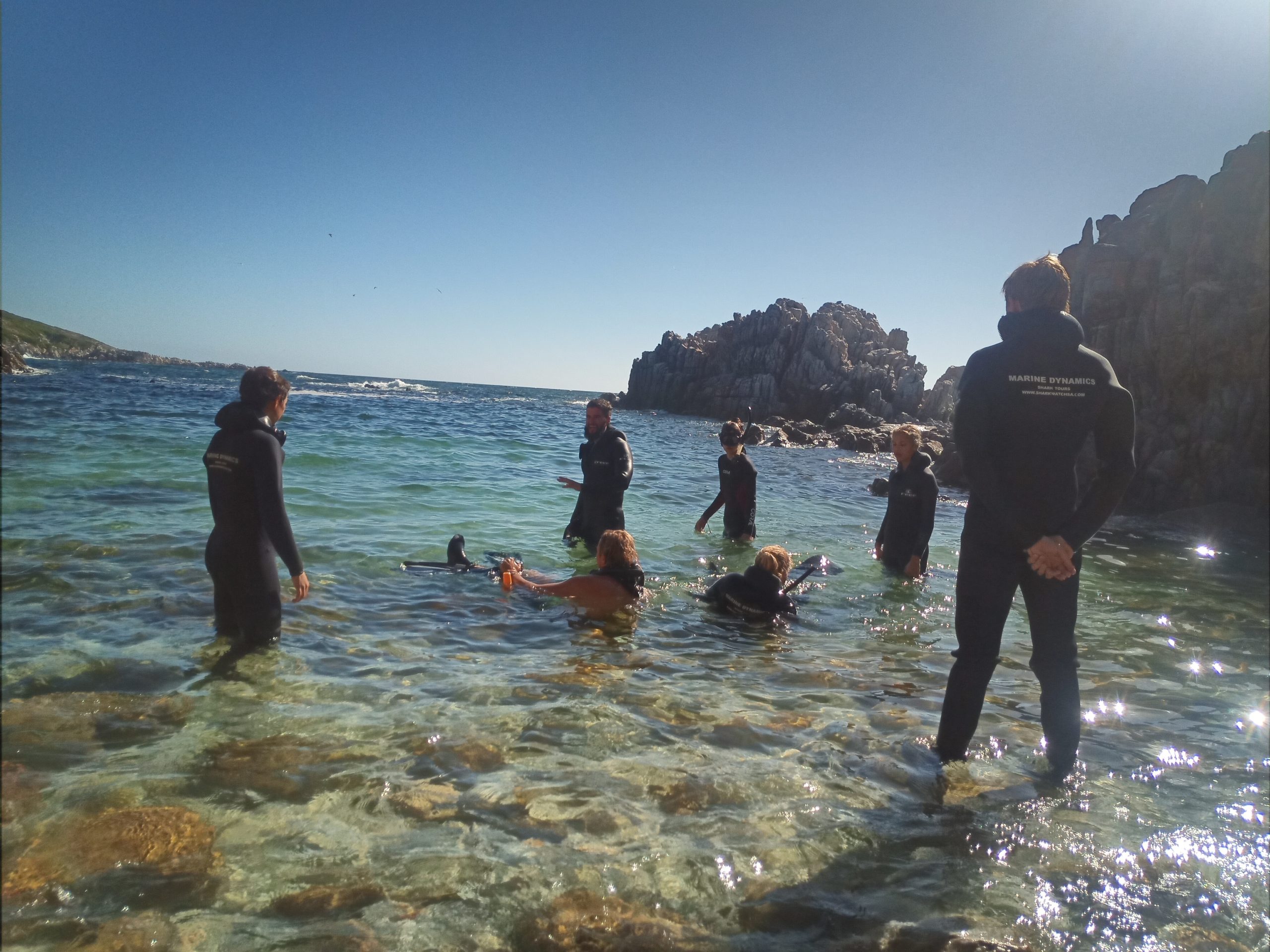 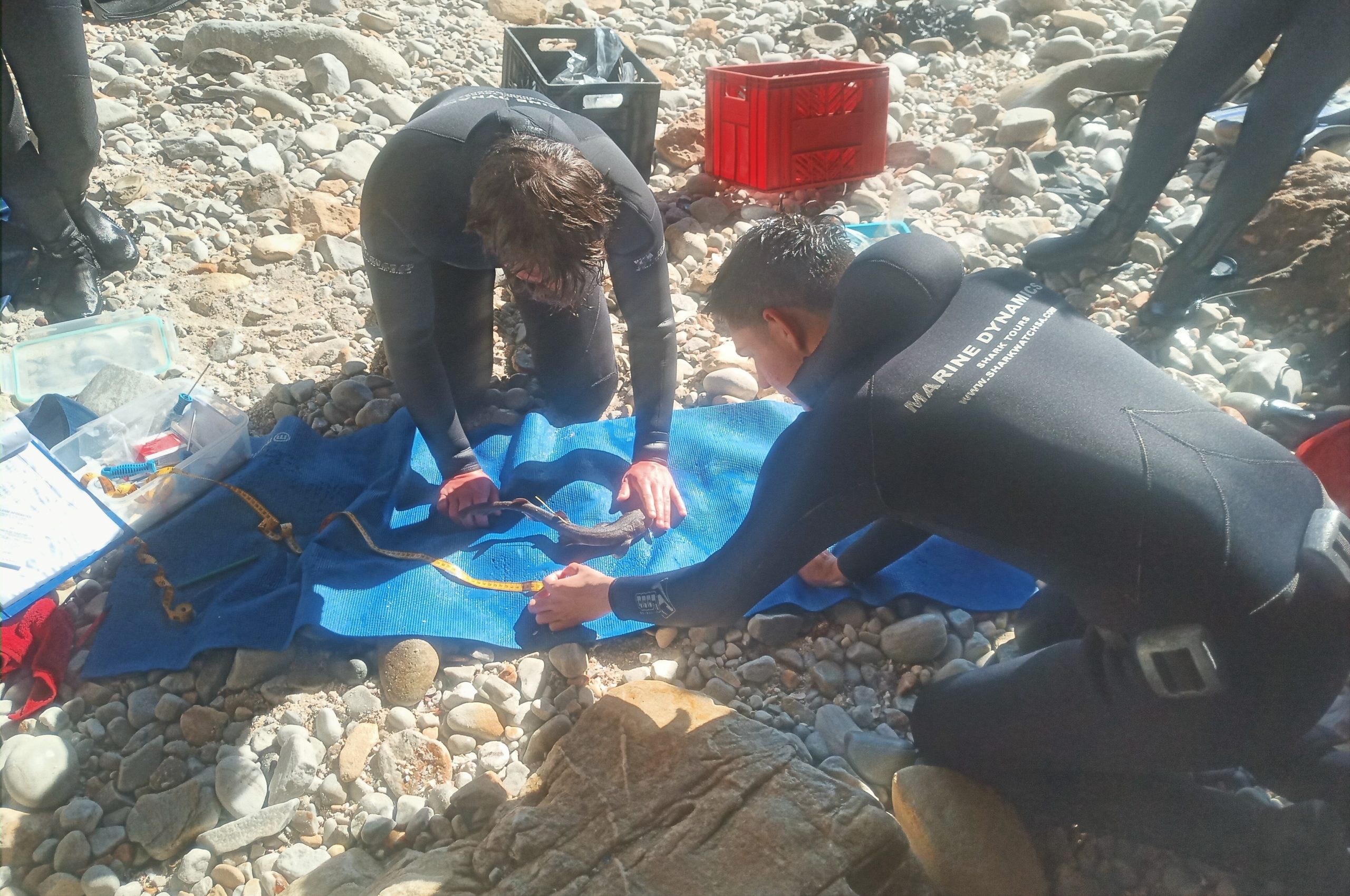 Finally, the day that everyone had been anticipating – a shark cage diving experience with Marine Dynamics. Whilst a great white shark did not visit, the group was excited to meet the bronze whaler shark. The students assisted with data collection which they analysed after the trip along with a white shark fin ID challenge. 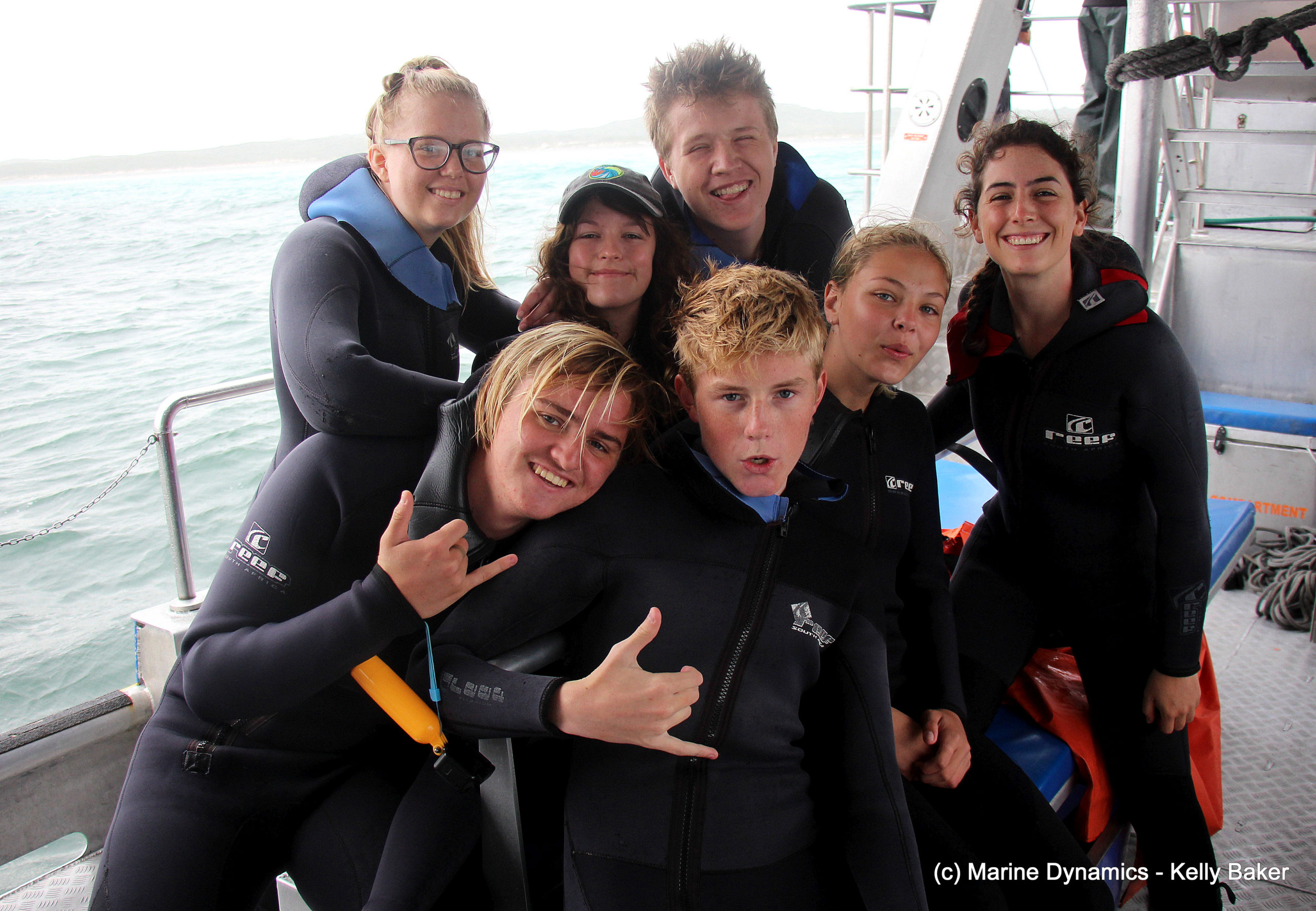 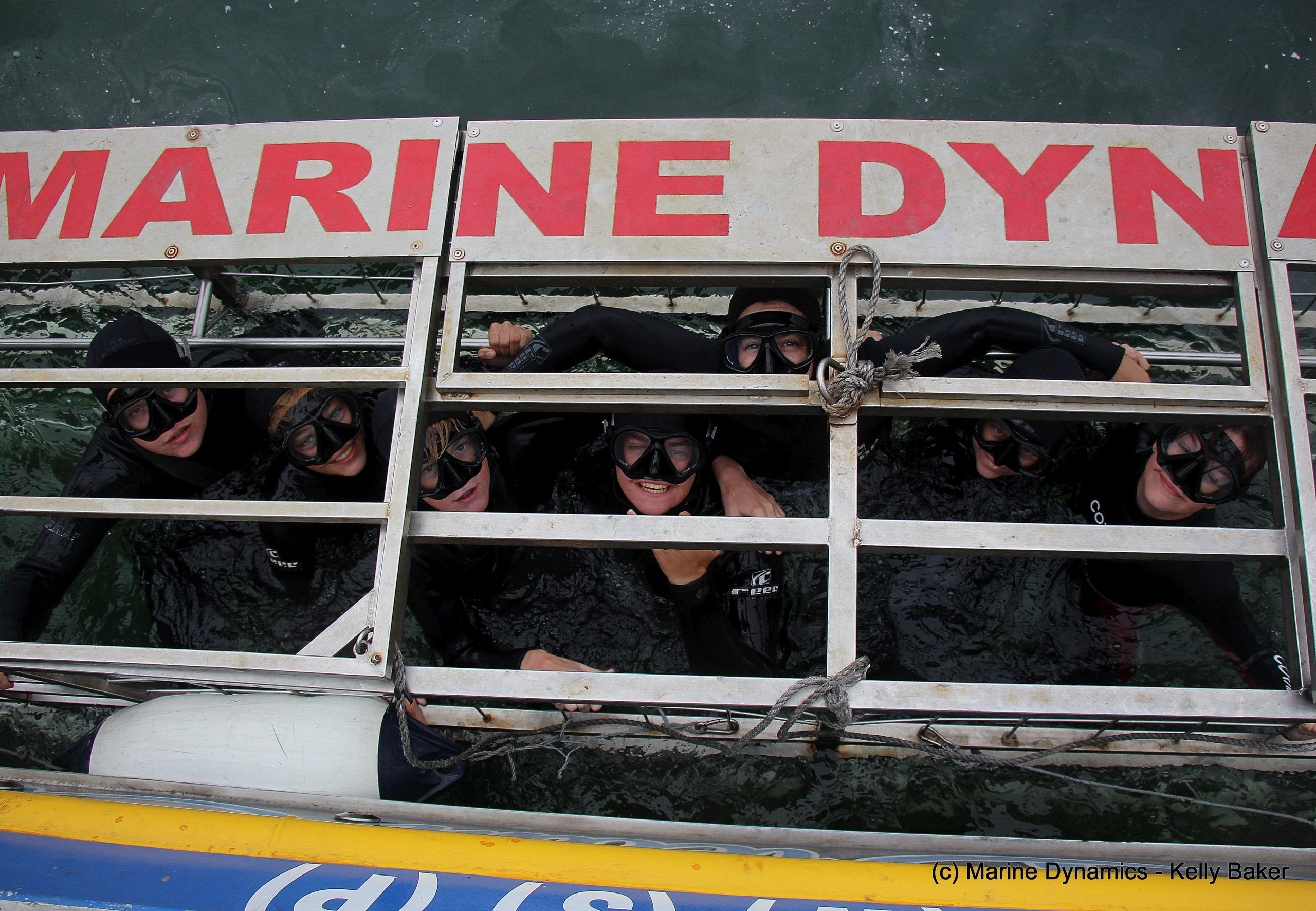 After a rather long day, the team sought out the sunset stopping at Gansbaai harbour and then at De Kelders to catch that golden moment the area is famous for.

Biologist Alison Towner met with the group the following morning and spoke about her white shark research as well as informed them about the orca predation on white sharks and the subsequent necropsies.

Ralph then introduced them to the Baited Remote Underwater Video (BRUV) studies and the Uilenkraals Estuary system. The group later headed down to the estuary to monitor the various zones for temperature, salinity and oxygen. These parameters help inform decisions on the estuary. They also did a bird count with Sandra. This is normally done at every weekly monitoring so the team builds up a very good understanding on the various bird species that can be found here. 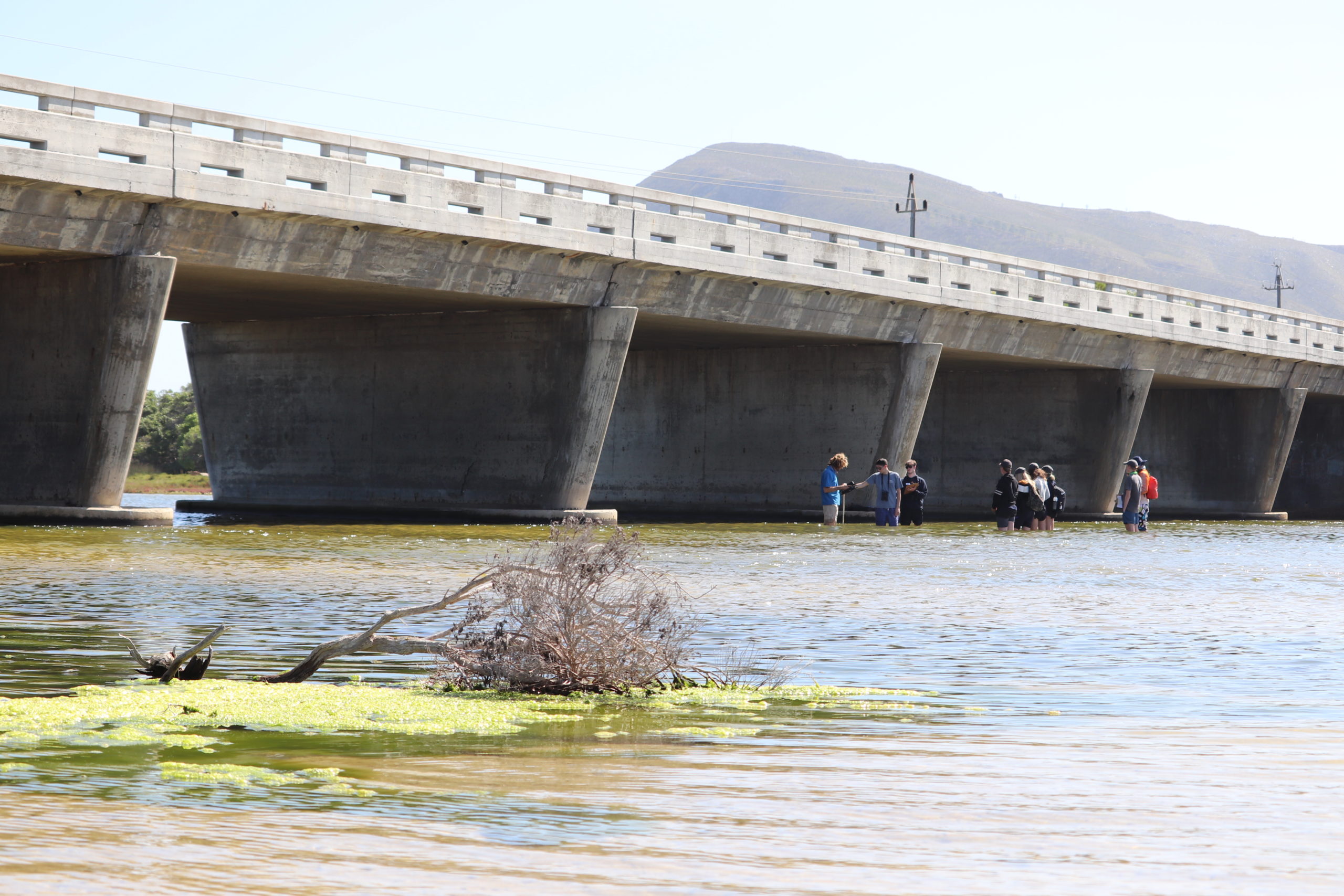 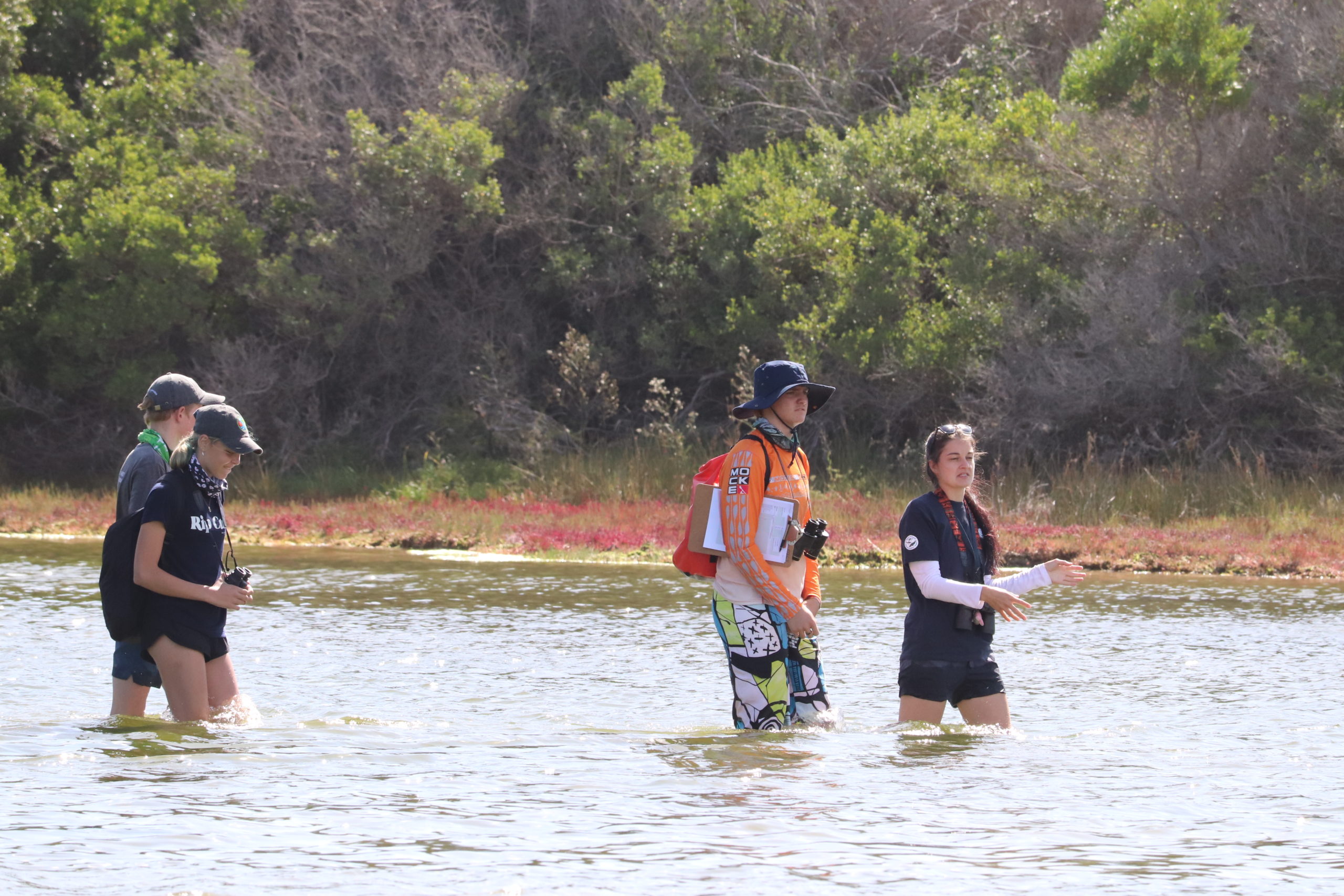 Environmental movie night and everyone settled in on some comfy couches for a documentary on False Bay’s orca hunting for dolphin.

The last day a deceased spotted gully shark was measured and dissected to ascertain cause of death. Again, the group was joined by the two interns Ryan and Todd. 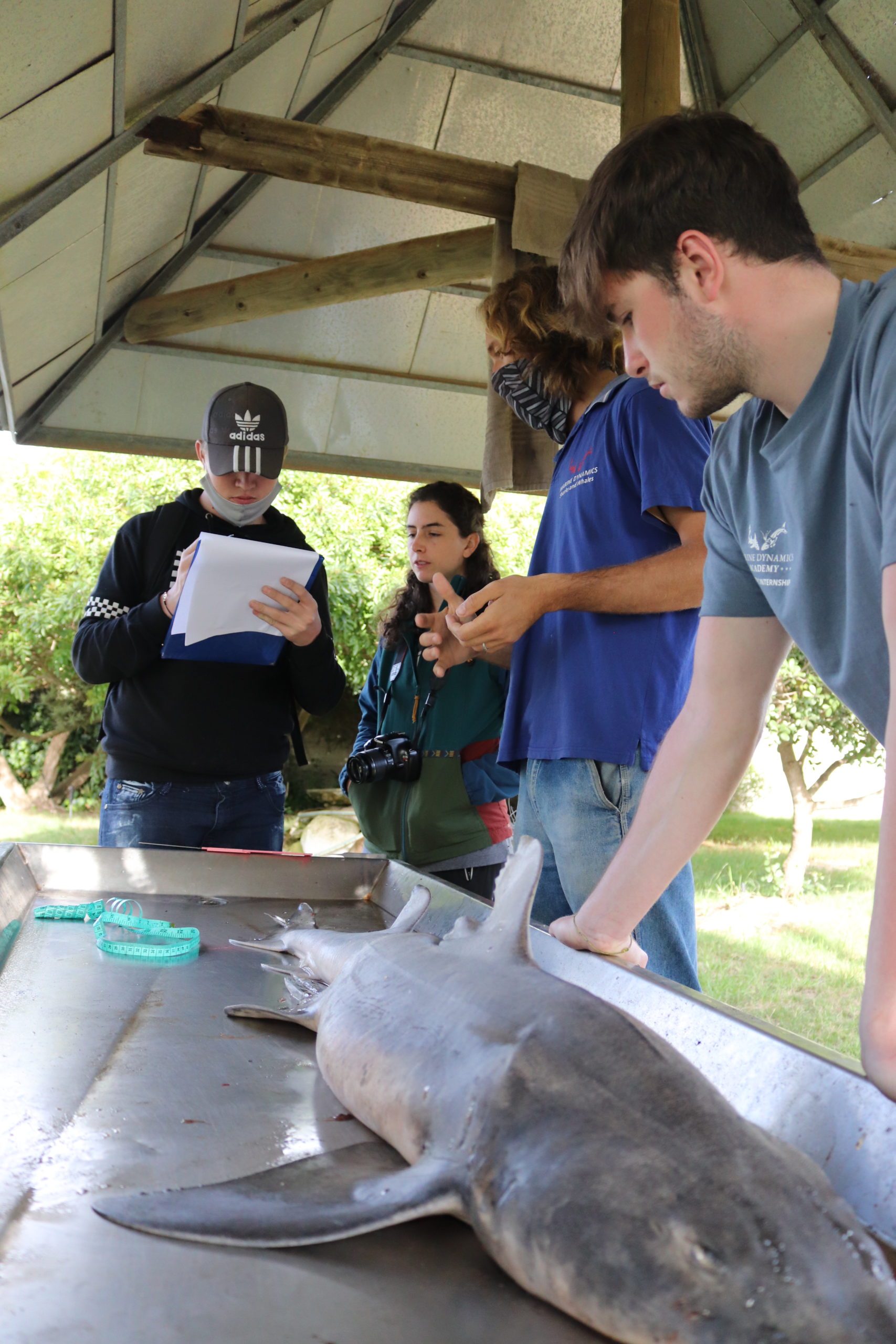 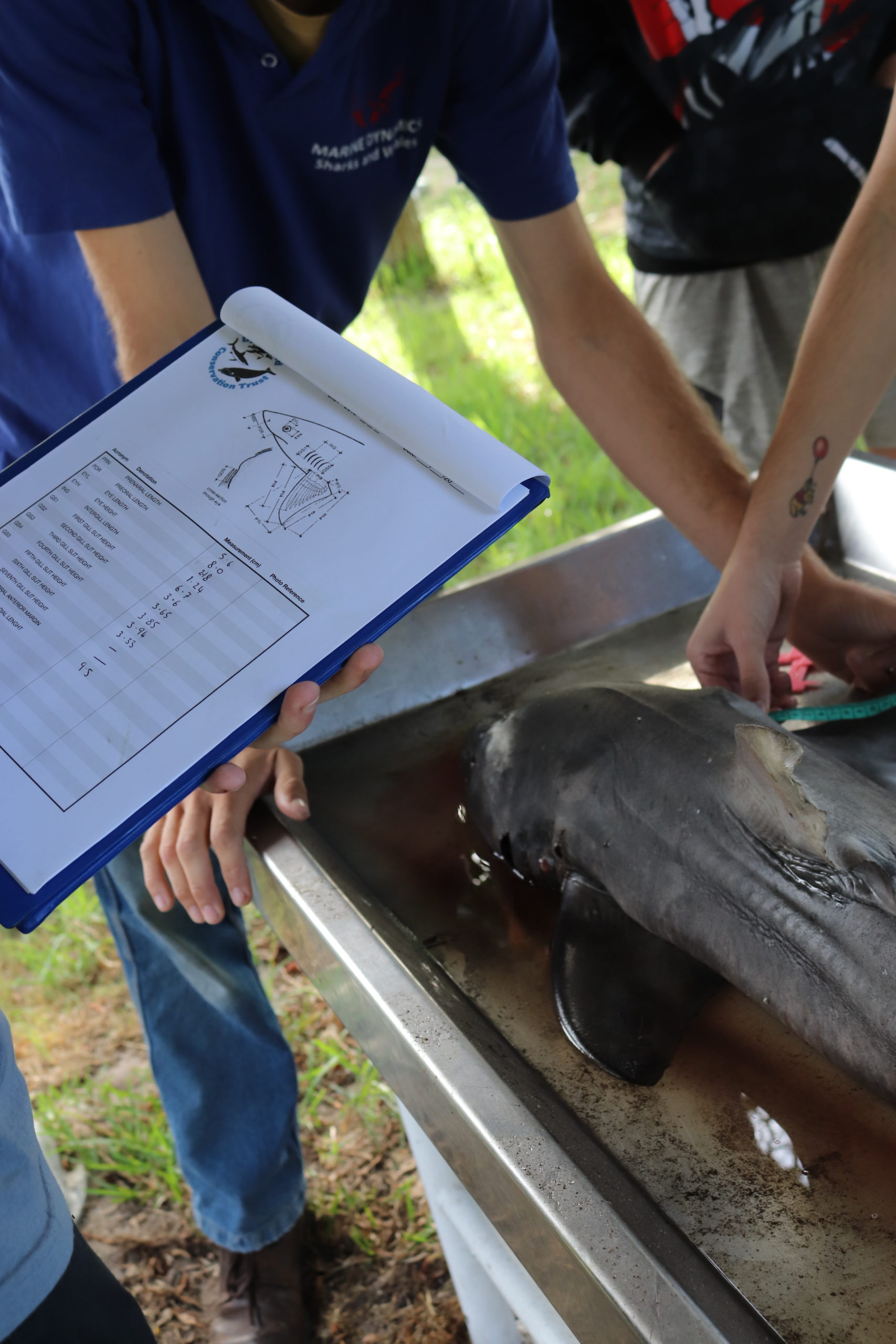 Throughout the experience, the students were encouraged to ask relevant questions of the team, in order to assist them in making future career choices.

Everyone received a certificate of participation and a few have indicated that they will be back as a volunteer. 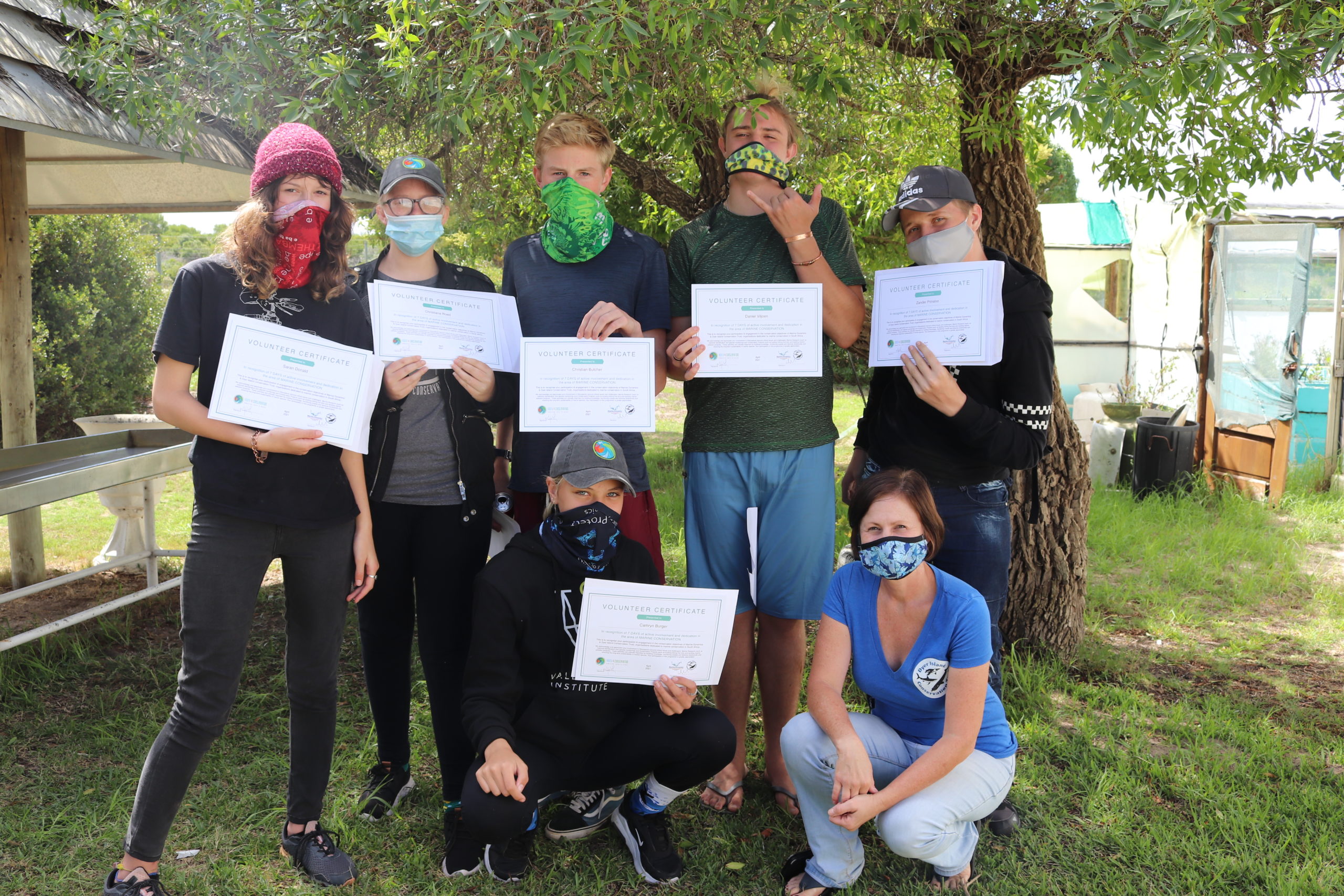 The group was led by Y4C facilitator Cecilia, and every evening all had a chance to share their favourite moment of the day, any low they may have experienced, and a cheer to someone. Needless to say, there were many cheers for the Marine Dynamics team, for which we are most grateful. 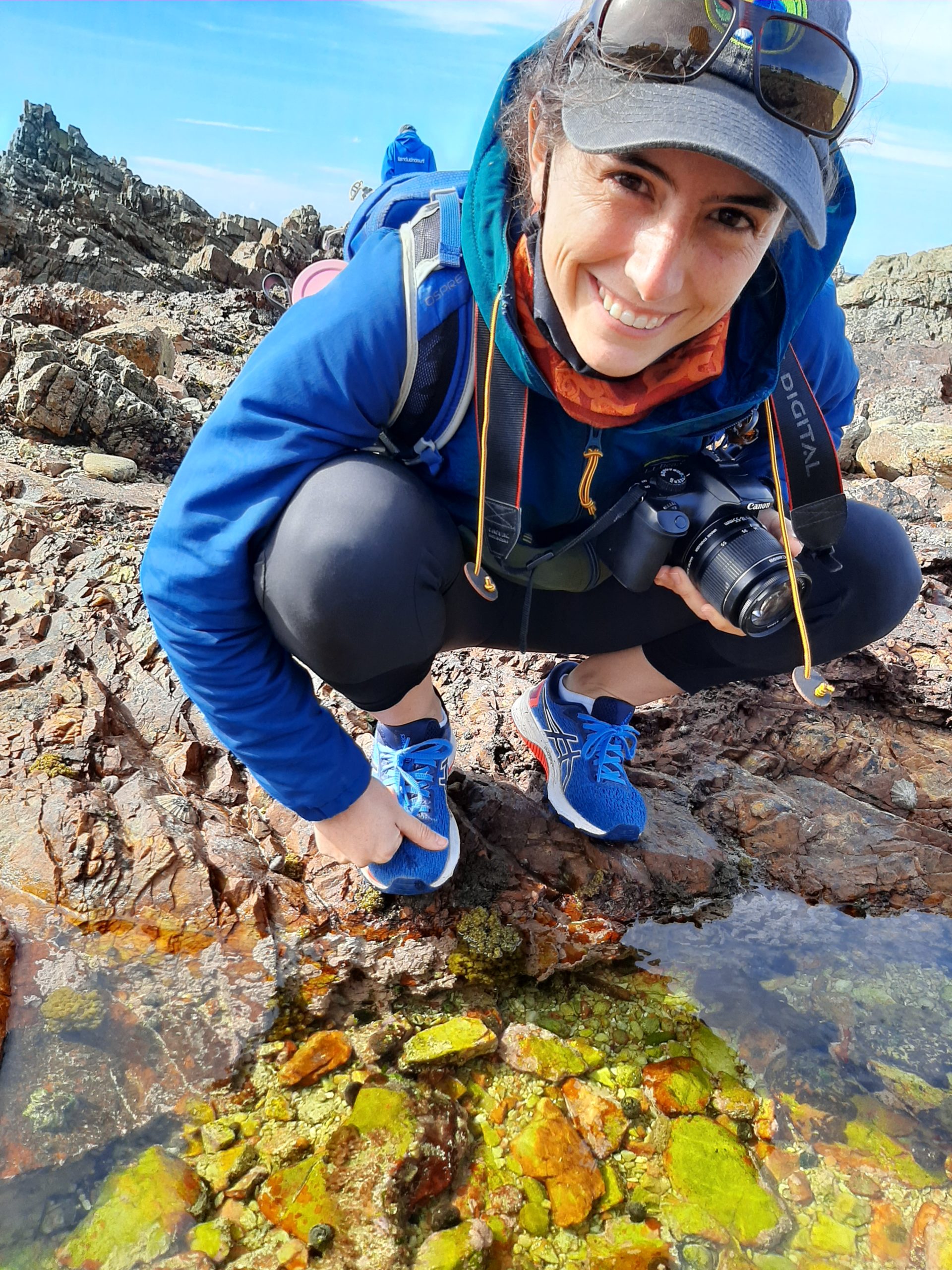 Feedback from the parents that made us beam:

“This was a life-changing experience for my son.  He particularly enjoyed being immersed with the PhD students who could answer all his questions and for him to work out how they make their passion into a job.  It was a very special time, and he made some lovely new friends”!

“My daughter had the most amazing time and is now so much more focussed on doing marine biology than ever before.  She is so excited about coming back and implementing some of the conservation activities close to home”!

“My daughter absolutely loved it.  Thanks so much.  She is positively beaming after the week on the programme.”

“Honestly, I have to say that this was the best experience of my son’s life.  He enjoyed every moment and he learned so much.  He is already talking about returning to volunteer”.

“My daughter loved this programme.  She had an amazing time! She learnt a lot from the facilitators who had extensive knowledge in their area of expertise. She had new experiences every day and made great new friends”.

A little bit of foosball fun before what was a sad goodbye. We look forward to seeing some of the group back for a volunteer experience. 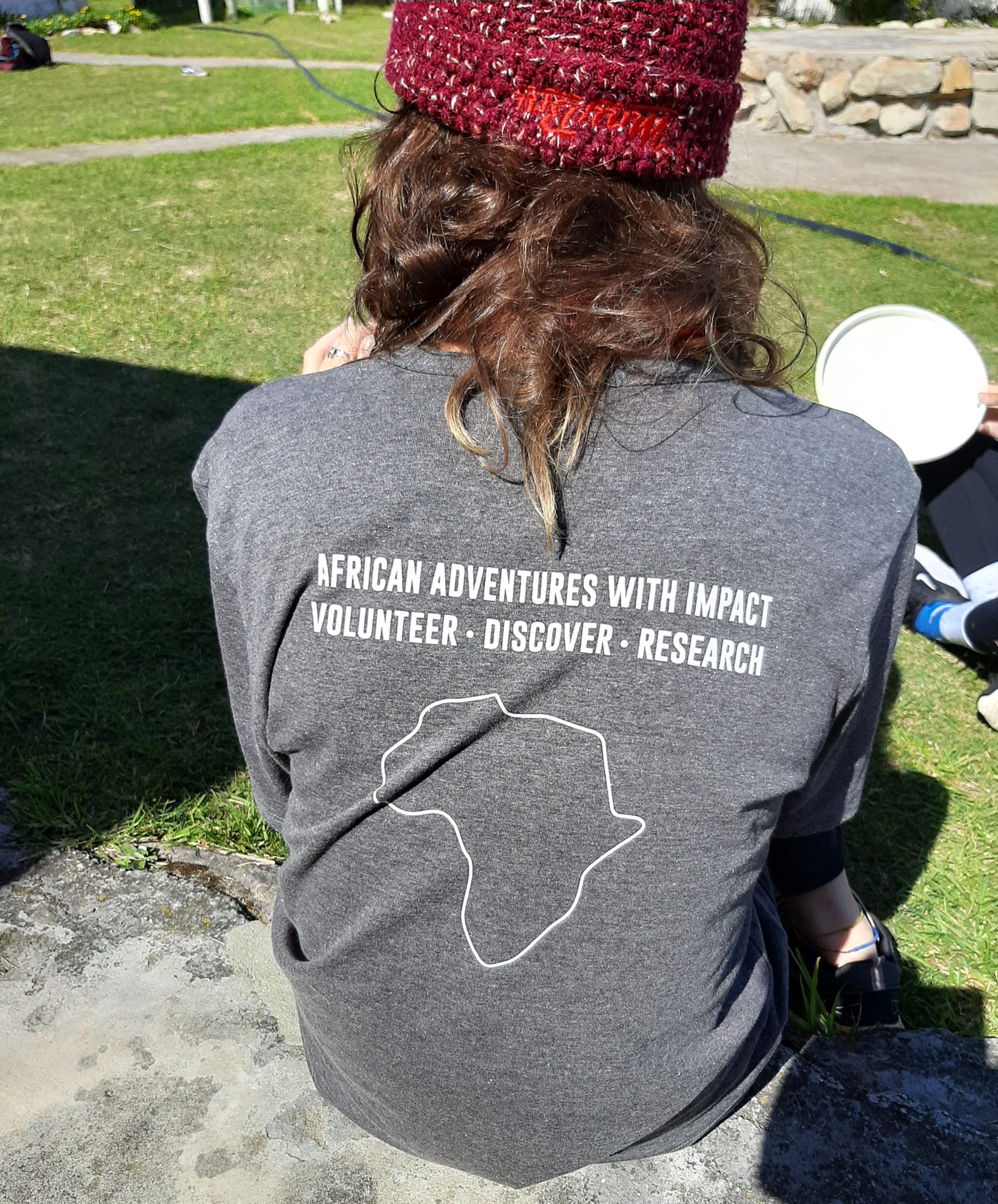 Special thanks must go to Maria and Ceci of Youth 4 Conservation.

Passionate about community engagement and wildlife conservation, Brenda works alongside Wilfred and has a direct role in all our various PR materials.