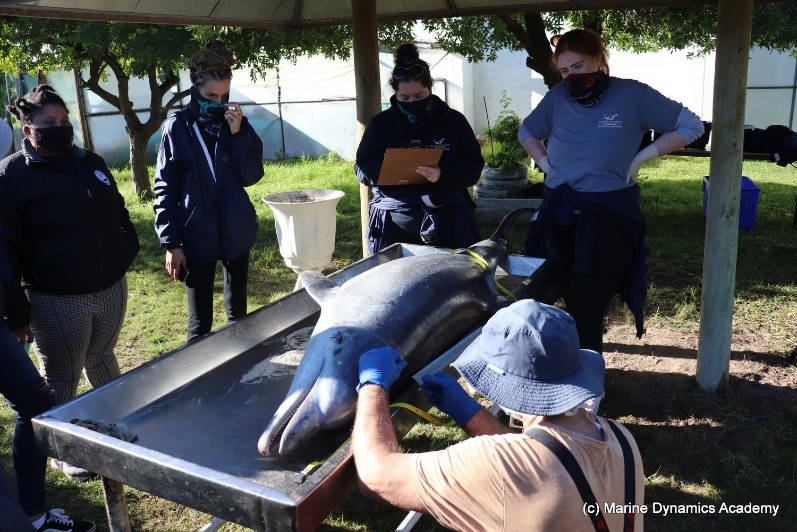 Whilst we all love to see marine animals swimming out in the ocean, and indeed this is how a great deal of research is carried out (through field identification and observation).

Strandings and necropsies provide scientists with crucial information about marine species, particularly as working in the ocean is much more difficult than working with land-based species; this information ranges from pathology or cause of death to having a closer look at their external & internal morphology. Each necropsy provides information that can help protect future individuals and can inform conservation management strategies.

By pure coincidence, I was able to help with 3 different necropsies whilst interning at the Marine Dynamics Academy. These were all opportunities to learn practical experience as a marine scientist, and something I had never done before. All 3 were also very different experiences; the necropsies were of a dolphin, a blue marlin and a cormorant. I therefore learnt a great deal in a short amount of time, and it was fascinating to learn more about the stranding and necropsy processes.

Cetaceans have always been a fascinating set of species to anyone with an interest in our oceans, and dolphins in particular are popular. Perhaps part of this is because as marine mammals, their physiology is closest to ours and we find comfort in this familiarity.

Nevertheless, we were quickly dispatched to find the stranded dolphin, and set off in the back of a bakkie to find the stranded animal. Having never been involved in a stranding event before, the spontaneity was exciting. Although the team was provided with images and a generic location, the lack of specific GPS coordinates made the task more challenging. Racing against the setting sun and incoming tide, a few members of the Marine Dynamics team set off towards Stanford in the hope of successfully retrieving the cetacean.

After searching the coast, and maybe getting stuck in the sand a few times, the team located the dolphin and were able to safely bring it back to Marine Dynamics. Upon closer inspection, it was determined the cetacean was a bottlenose dolphin, a naturally occurring species for the area. Unfortunately the dolphin was already deceased when the stranding was reported, and a necropsy was arranged for the following day. 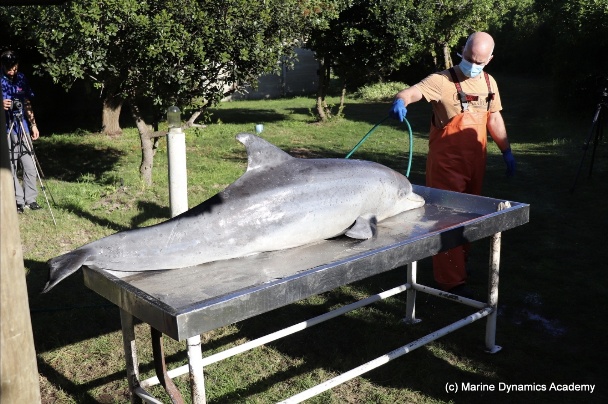 The dolphin was a male bottlenose, at 1.99m. The individual had notable spotting across the entirety of its dorsal side. The spotting was so unusual in fact that officials from DFFE aided in the necropsy due to its scientific interest/importance. 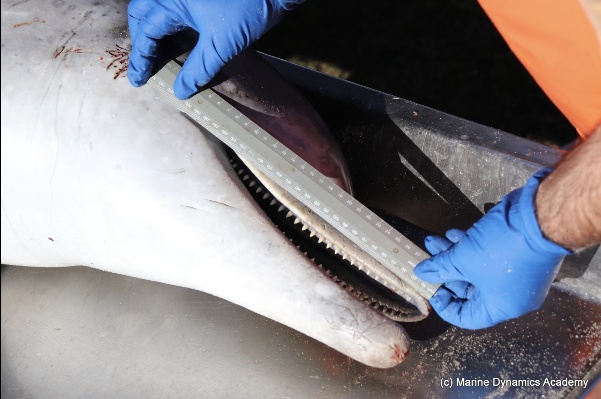 The first step was to measure the animal to determine its size, which was noted down.

As Interns we were responsible for noting down all the relevant data on the required form, as well as taking photographs throughout the necropsy. 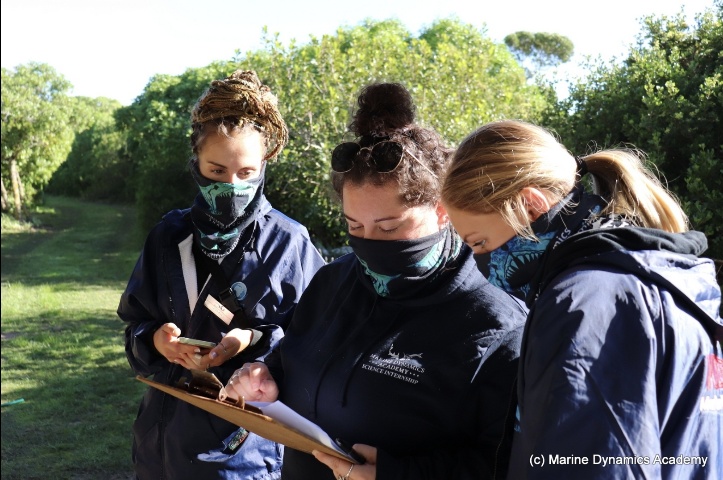 Once measured, the necropsy began and the dolphin was systematically dissected. 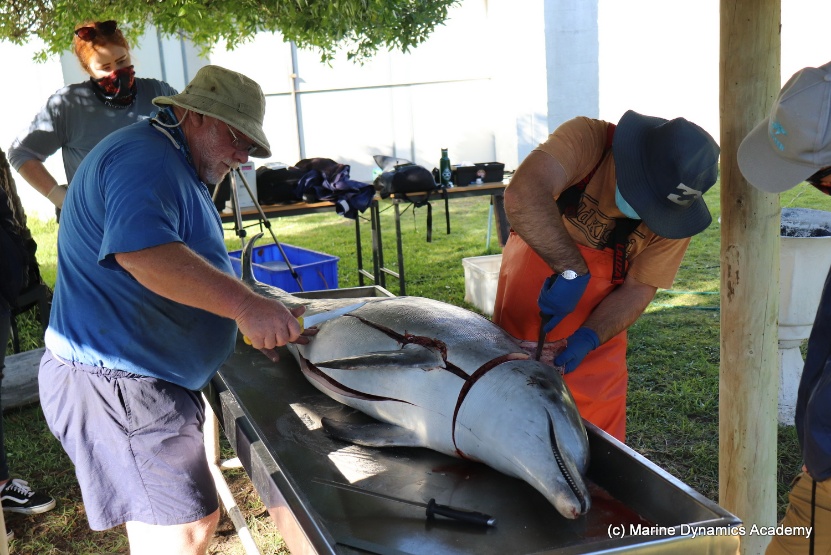 Biological samples were taken at points of interest; for example with any parasites, the individual’s skin, and dorsal fin samples. 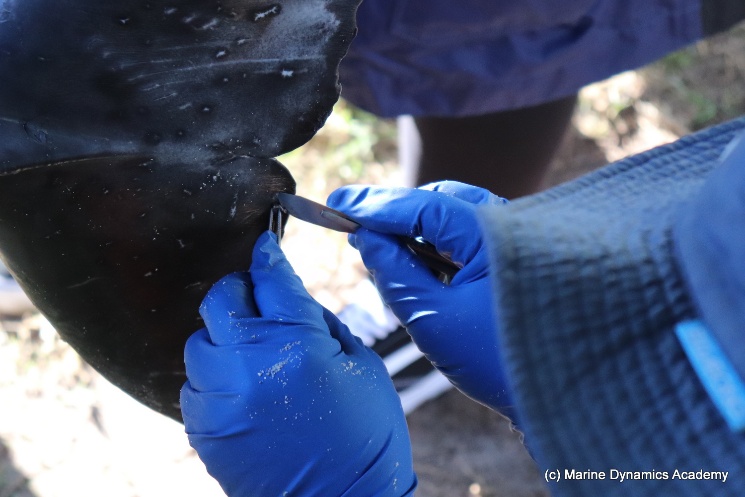 These samples were sent off for analysis, and though the results are still currently being processed/have not yet been received, it is suspected that the unusual markings on the cetacean’s skin may have played a part in its ill health.
The government have retained the entirety of the dolphins remains so that further research can be carried out.

By contrast, the marlin stranding was much more challenging, largely due to the sheer size of the fish. It took around 7 people to haul the marlin off the coast, and having to retrieve the fish in darkness made it even more difficult. Indeed, it was so dark, we used the torches on our phones to light up the rocky path back to the bakkie. Once again the organism was dissected the day after its retrieval, with the most notable difference between the cetacean and fish being its size. The marlin was roughly 2.6m total length and it was much more damaged due to the fish bashing up against the rocks when stranded.

What was exciting was the opportunity to help measure this individual, and really get stuck into the Science. The fact that this was also the first marlin dissection Marine Dynamics academy have done was also pretty special. 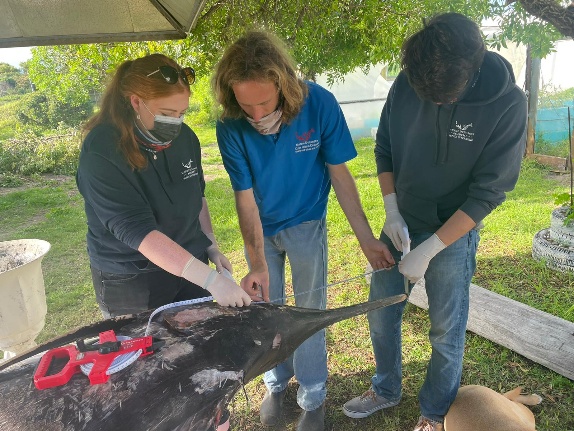 As a team, we quickly measured the marlin and noted this down accordingly. Once measured, we were fortunate to have a professional taxidermist help in the dissection of the marlin. Similarity to the dolphin necropsy, each part of the dissection was explained and demonstrated, making it an invaluable learning experience.
Internally, the dissection again slightly differed, due to the dissimilarity between mammal and fish anatomy. Notably, there were lots of smaller swim bladders in the marlin which we didn’t see with the dolphin and of course there were no lungs. Of particular interest was the skeleton, as the species is so rarely seen. The skeleton was therefore carefully removed throughout the dissection, in order to eventually be displayed for educational purposes.

In an even bigger contrast, the third (and final) dissection I took part in was a cormorant necropsy at the African Penguin & Seabird Sanctuary (APSS). The anatomy of a seabird clearly differed from those of pelagic marine organisms; however it was fascinating learning more about their internal anatomy. It was also the necropsy in which I was the most hands on, actually aiding in the entire necropsy. The bird had sadly died from a broken tailbone, however by conducting this necropsy it provided us with further information on the species and how the birds injuries affected it in its final stages of its life.

Dissecting the cormorant took less time than the marlin or dolphin, purely due to size. The cormorant dissection was around 2-3 hours long, compared to the marlin and dolphin which took most of the day. Again, we dissected the cormorant by first looking at its organs, and noting down any signs of stress. Then we moved to look at the broken tail bone and finally the brain. 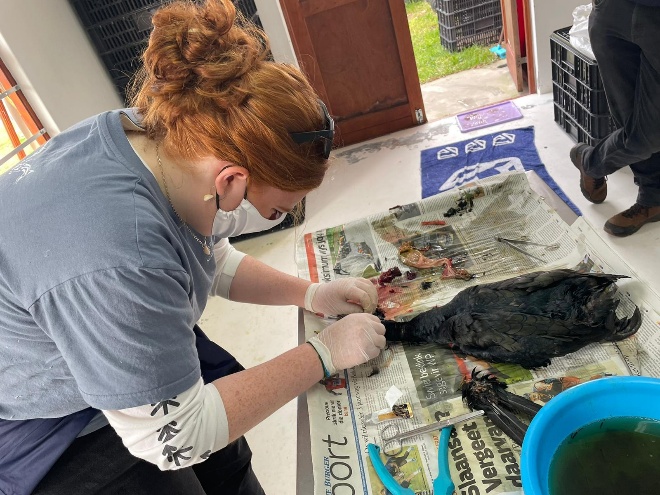 The work done after a stranding event can be potentially as crucial as beforehand. Every marine organism that we study contributes to a larger research database that future scientists can use.

That is why, whilst clearly a sad event, the scientific opportunity to perform a necropsy can provide vital information in keeping current populations thriving.