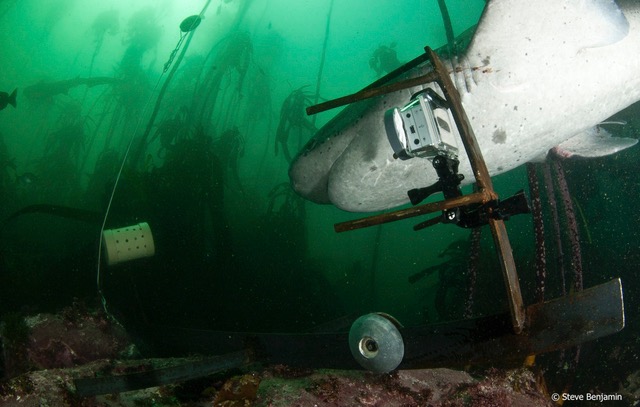 Our team from Marine Dynamics Academy went out to sea to deploy four Baited Remote Underwater Video systems (BRUVs) around Dyer Island. This project is done in collaboration with CapeNature, for long-term monitoring of the Dyer Island Ecosystem.

The BRUV rigs were deployed at four predetermined sites around the Island. Before lowering the rigs into the water, we made sure they were all equipped with a GoPro on the one side, to film the action around the bait canisters, which were filled with sardines, on the other side. The rigs were lowered to the bottom, and the cameras filmed the marine life for just over an hour. The reason why the BRUVs are deployed for about an hour is because that is the time where its likely to see the most variety in the species around the rig in relation to the amount of effort.

After the hour was up and all four BRUV rigs were back on our research boat Lwazi, we made our way back to the mainland, to analyze the GoPro footage. The process of documenting and identifying the species found on the videos can take a while, especially when we have encounters with unknown animals. During this BRUV deployment there were some beautiful sightings of a broadnose sevengill shark (Notorynchus cepedianus) circling the bait canister.

The broadnose sevengill shark is a coastal shark species that belongs to the cow shark family (Hexanchidae). As the name already says, it has seven gills which is one of their distinctive features, as most other shark species only have five. Two other body features that make this species easy to identify is the broad nose, as well as the single dorsal fin further back on their bodies. These sharks can be found in most of the world’s oceans, excluding the northern Atlantic and Mediterranean Sea. Their diet consists of bony fish, marine mammals and smaller shark species and depends on the maturity of the individual. This species is still commercially fished for its liver oil, leather and human consumption. It is unknown, if and under what pressure it stands, but because it lives in shallower waters, it is more easily accessible to the fishing industry.

When visiting our coastline we often don’t realize that these amazing animals are part of our ecosystem, living and reproducing in the kelp forests along the shore, playing an important role in the food web that makes up the circle of life. By deploying and analyzing BRUVs, we get the chance to learn and understand more about their distribution, seasonal abundance, and behaviour. This plays a big role in conservation, research and education, so that our oceans can be acknowledged by not only scientists and activists, but by people like me and you.

Nane studies coastal and marine management in the Netherlands