A substantial amount of marine science is conducted through field identification, observation and sample collecting of living animals in their natural environment. Acquiring data and knowledge from afar has its limitations, so when the opportunity arises to gain up-close access to these animals and learn more about them from an anatomical and physiological point of view, as marine scientists we grasp this opportunity with both hands! 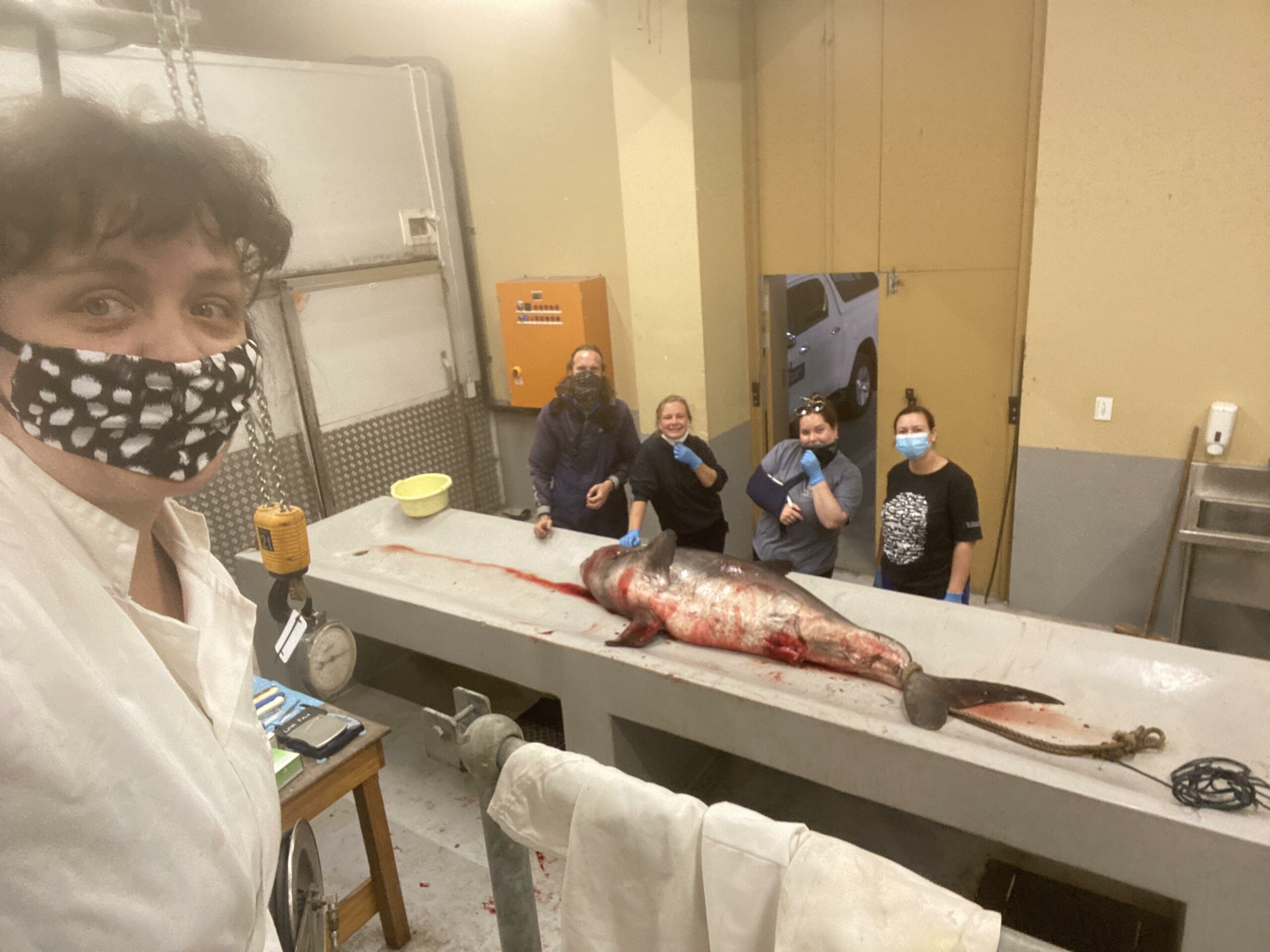 Interns from Marine Dynamics Academy (MDA) were invited by Dr. Charlene da Silva from the Department of Forestry, Fisheries, and the Environment (DFFE) to take part in assisting with the dissection of a female porbeagle shark Lamna nasus. The purpose of this dissection was to examine the anatomy of the specimen and find any abnormal appearance of any internal organs. The female measured 2.19m in length and weighed just over 100kg. When we opened the individual, the size of the liver was astounding and took up a significant portion of the internal cavity. An interesting observation was the dark red blood vessels on the inside of the liver. This seems to be a physiological component of the Lamnidae species (which the white shark also belongs to) that plays a part in maintaining a warmer internal temperature. Once the internal organs had been inspected, the specimen was cut into 13 equal slices. The white and red muscle of each slice was measured, and biological samples were taken. This was to aid in the research of Dr. David Bernvi. This was a fascinating day and we loved assisting with every aspect of the dissection. 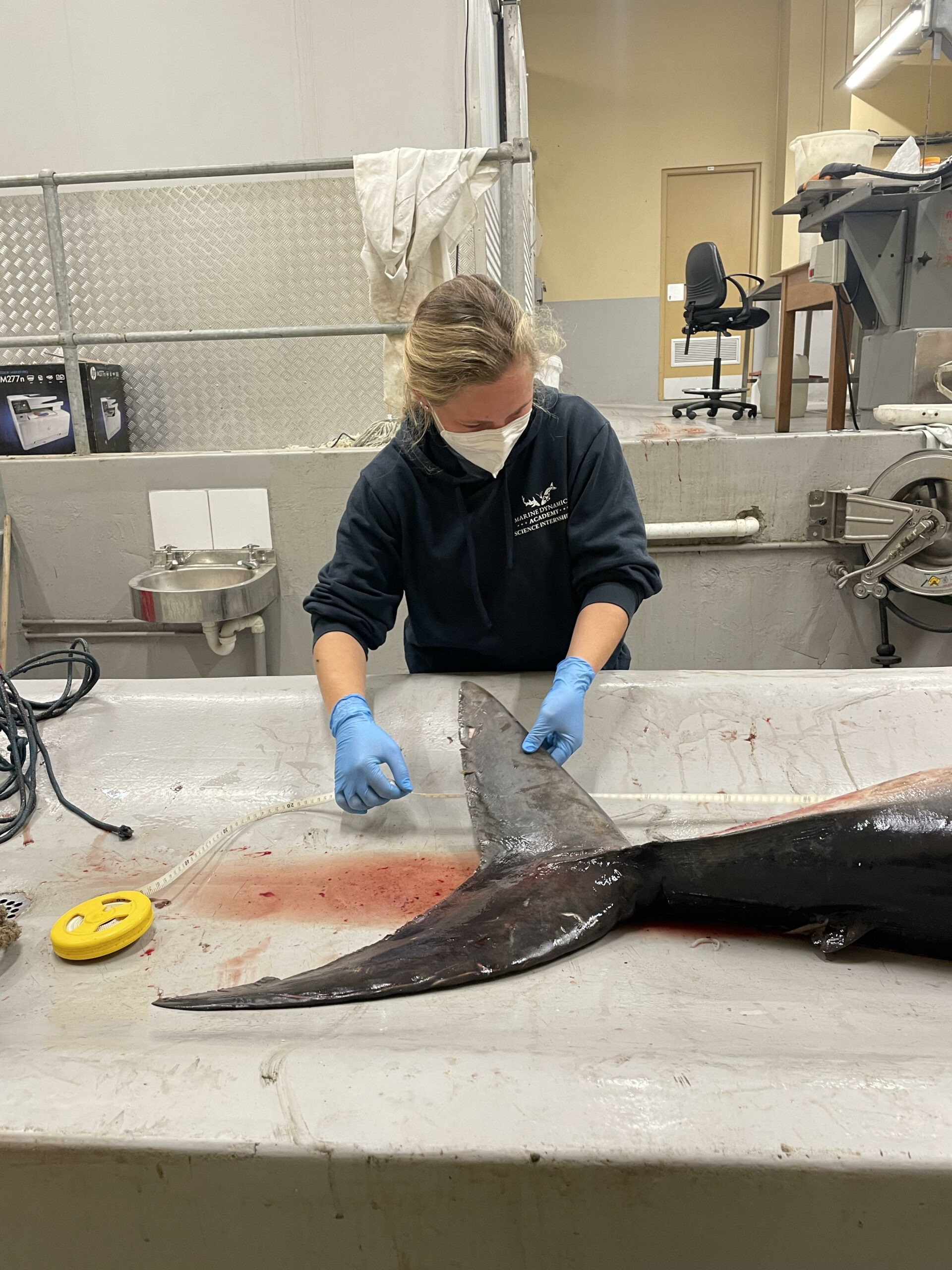 A week later MDA was kindly invited back to assist in multiple dissections of deep-sea sharks and skates collected off the coast of South Africa. The aim of these dissections was to look at the diet and reproductive status of a range of species of the Chondrichthyan subclass, elasmobranchii, and correlate it to the size and sex of each individual. 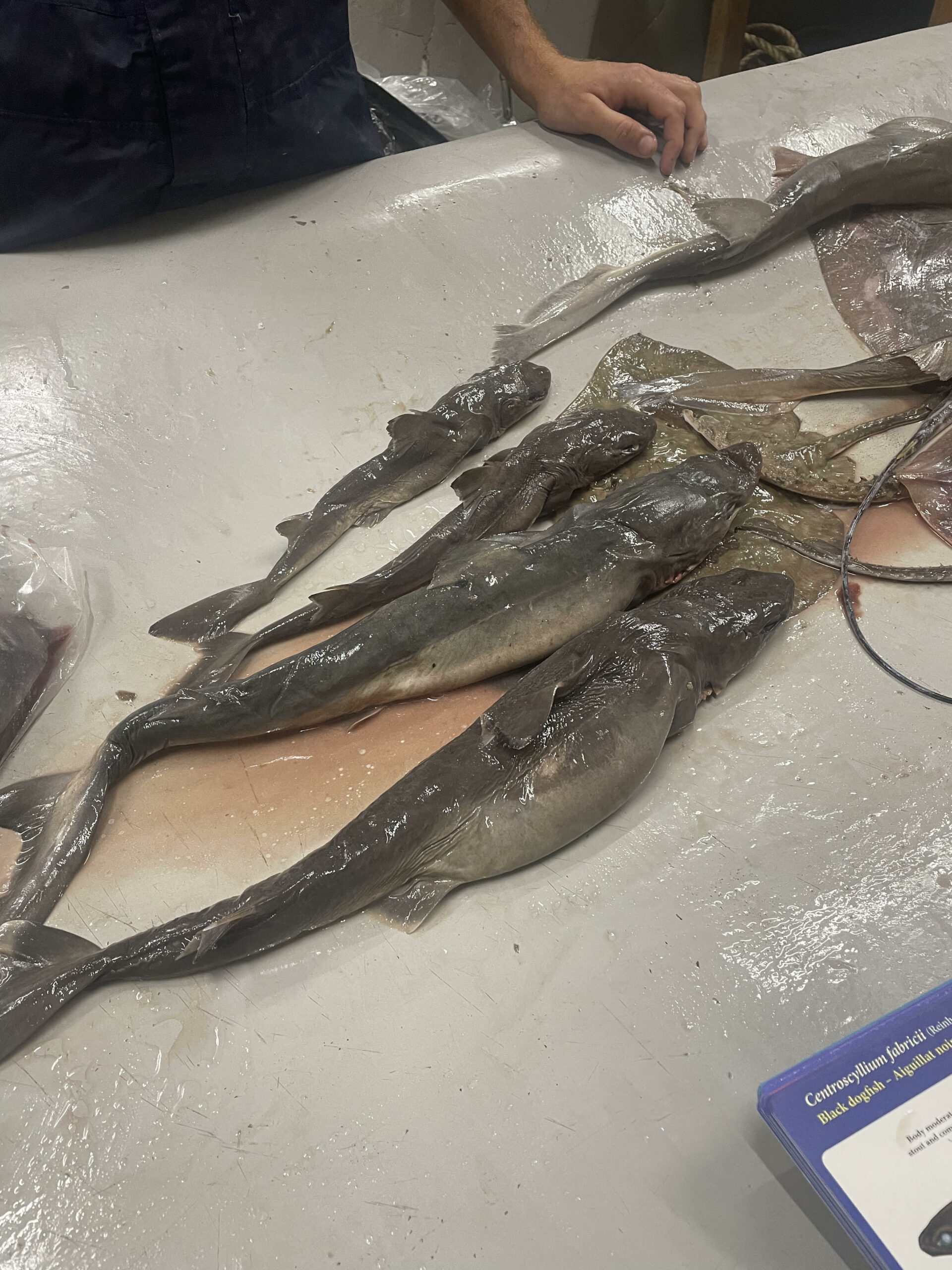 A team of 11 including the two MDA interns and supervisor, Ralph Watson, were split into groups to carry out around 70 dissections. The first job was to correctly identify each species and the lead scientist, Dr. Charlene da Silva, discussed with us how to find the distinctions between skates and stingrays. After identifying and recording the species, the interns were responsible for weighing specimens, taking measurements, and providing general assistance as each group began the dissection procedure. The process of dissection was explained step-by-step to us so we could learn the correct way to dissect each individual depending on species. Biological samples were taken of the fin for genetic analysis. Weight measurements were taken for the liver, reproductive organs, and stomach. The stomach contents were then decanted and briefly examined to identify contents. Contents of note included crustaceans, unidentified teleosts and high parasitic count. Certainly not a job for the faint-hearted! 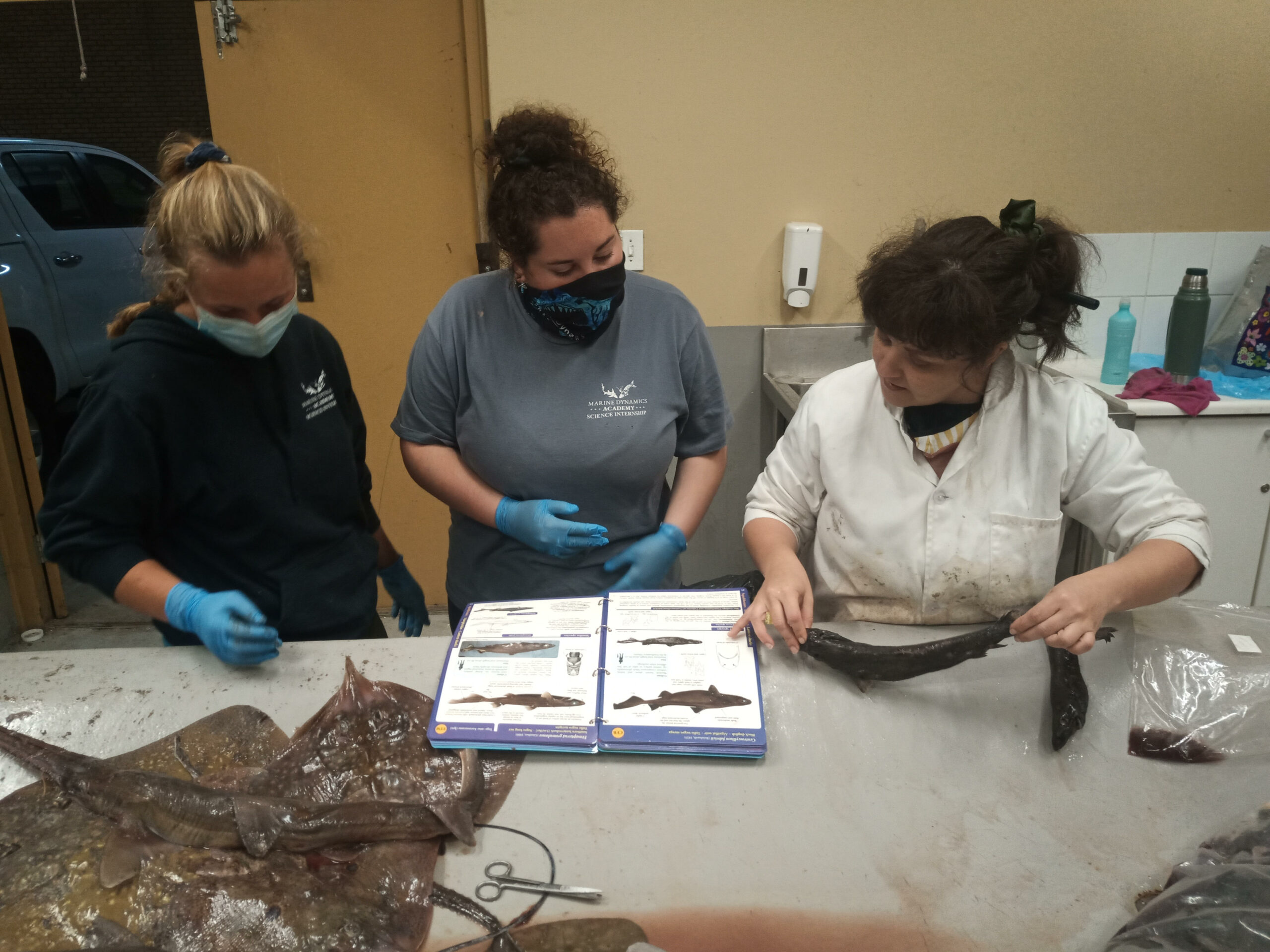 An interesting (but unfortunate) discovery on one small shark species was the presence of three pups inside the womb. Seeing the varying stages of sexual maturity up to the presence of fully developed pups was fascinating and comparing the internal stretching of the reproductive organs and size of the ovaries in contrast to an individual that was yet to reach sexual maturity meant that we learnt how to determine how sexually mature a female individual is and if there had been a prior pregnancy. The male individuals’ claspers were checked for calcification against a 5-point scale which determined if the specimen was in the process of becoming sexually mature or had completed development.

Perhaps the most exciting species of the day was a sixgill sawshark Pristiophorus cirratus. Observing the extended saw-like rostrum was fascinating. As there is still so much that is not understood about this species, having the opportunity to perform a dissection on a sawshark was particularly exciting and our MDA supervisor, Ralph Watson, was especially keen to carry out the dissection of this individual! 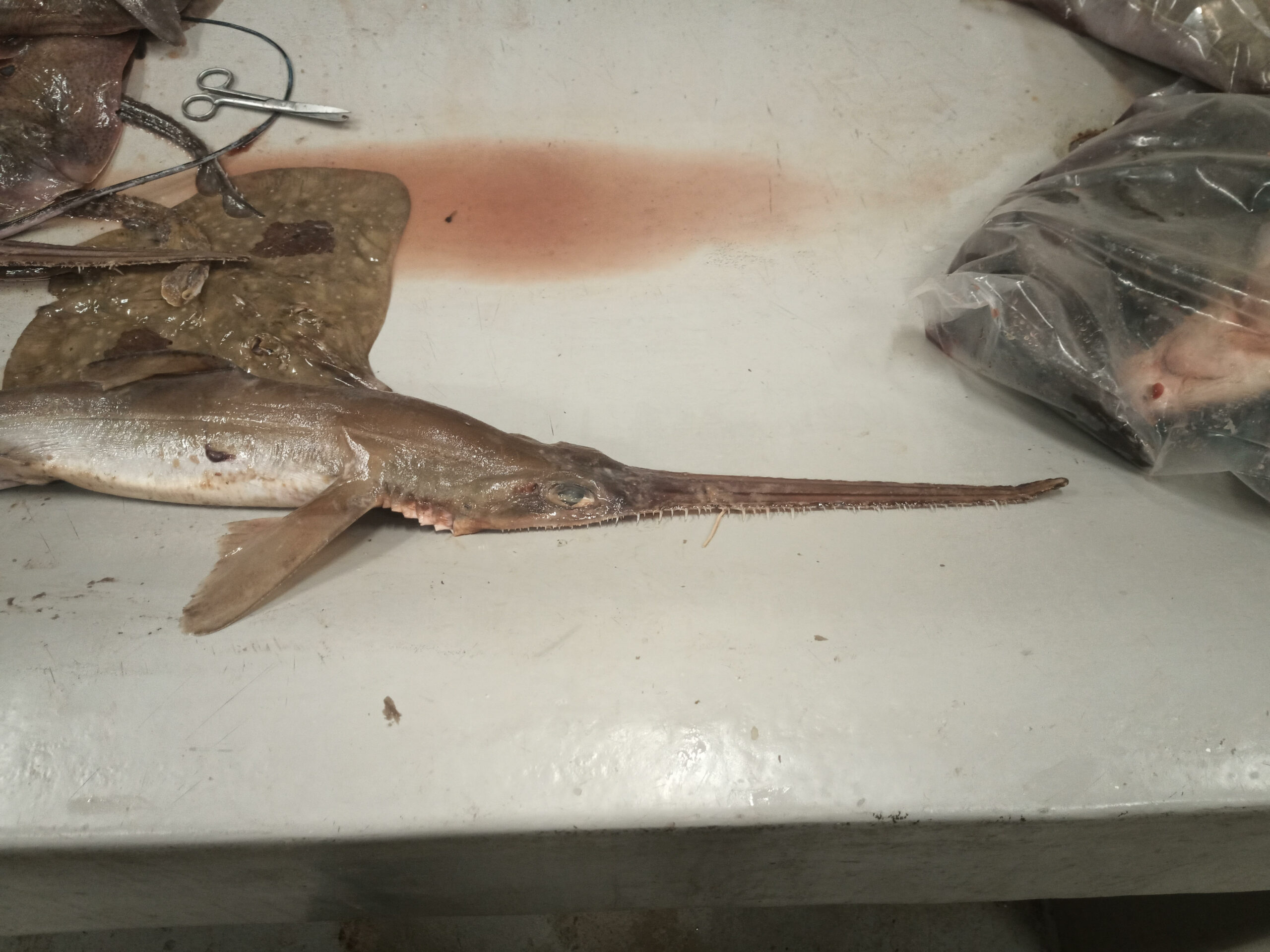 This was a truly exciting and informative day and we walked away having acquired invaluable skills that will help us grow as young marine scientists. A huge thank you to Dr. Charlene da Silva and the rest of her team at DFFE for inviting us to take part!