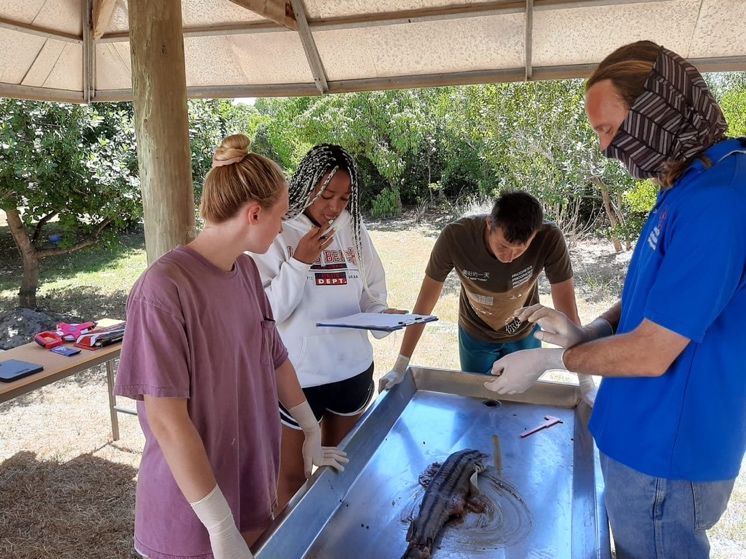 During my time interning with the Marine Dynamics Academy programme, we had the opportunity to dissect a shark. We learned about the hundreds of measurements you can take on even a pyjama catshark that is less than meter long! It smelled horrible but it was one of the coolest experiences I have ever had in my life.

Being able to see the anatomy of a shark made such a huge difference in my understanding of how sharks work and how important everything is. Seeing the organ placement firsthand gives so much more perspective on what really goes on inside the shark and how the body processes work.

The three big questions to always remember are “What?”, “When?”, “Where?”. First, we took note of the date, where we were, how the shark was frozen, species, male or female (male if there are claspers) and the date it was found — we did not have that information this time.

We used a vernier caliper and a measuring tape in order to get the most accurate measurements of the shark. The depth measuring blade on the vernier caliper helped us get pretty exact measurements. It is most helpful to assess the lengths from the same side so everything is consistent. It also helps to measure the depth of the eye by inserting the depth measuring part of the caliper into the ocular pocket of the eye, until the metal part can no longer go further, and then using the measuring tape to quantify the length of the blade. 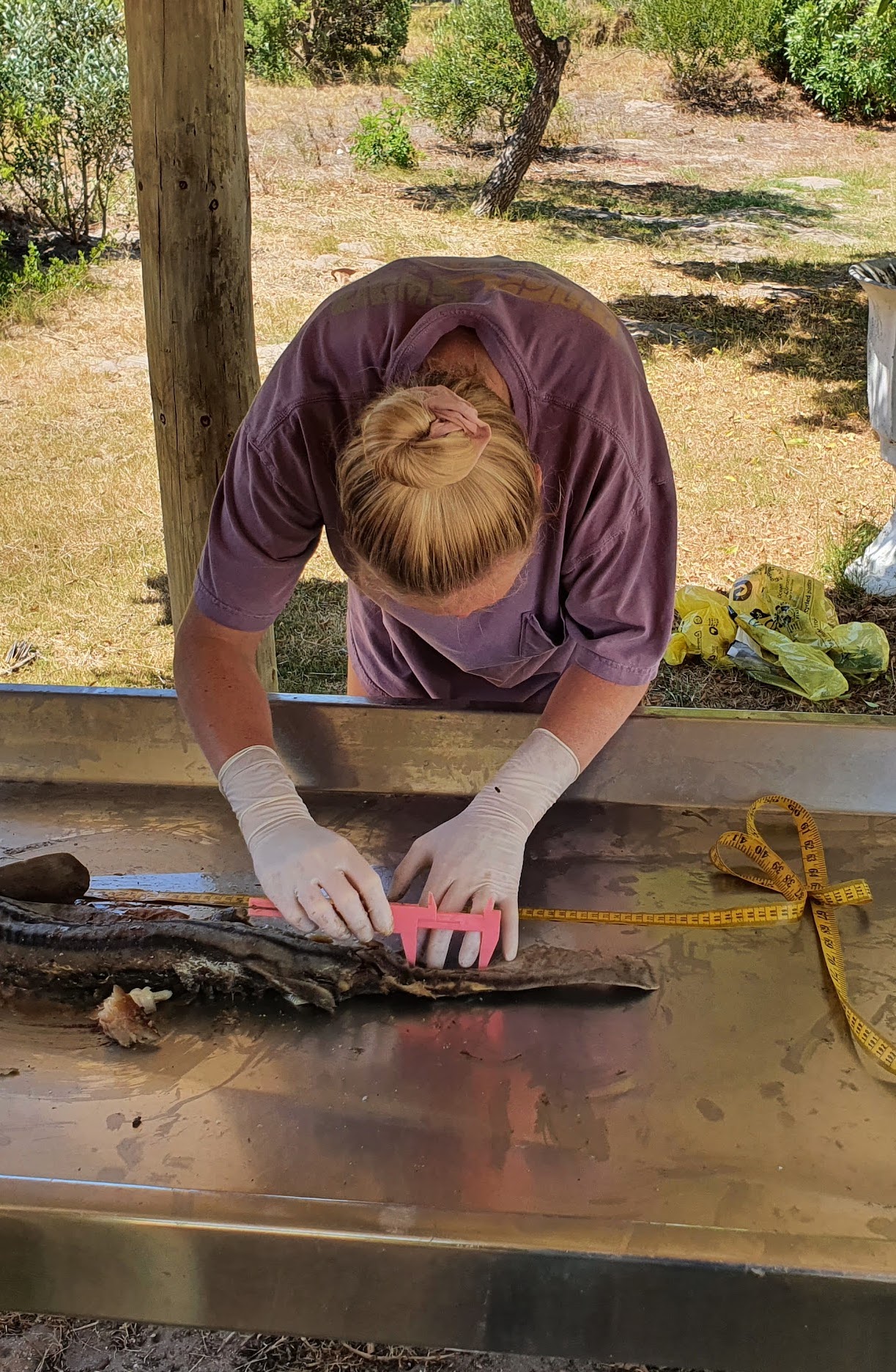 After all the measurements were made, we looked at the internal organs. The pyjama catshark we were measuring had already been opened on the bottom side and there was a lot of freezer damage. We could not take DNA samples because when an animal is unfrozen and frozen again, the ice crystals damage the DNA, making it useless. However, we went over the steps of how we would have proceeded. We even took a look at the teeth, which were incredibly small for this animal. They have teeth with three cusps: a central longer cusp and two cusps on each side. You can tell a lot about the diet of an animal by looking at the teeth. These cusps help grip onto their prey. Pyjama catsharks are opportunistic predators that eat other small sharks, invertebrates, embryos inside egg cases, and bony fish.

Another cool thing we were taught is about the blood of sharks. All sharks are cold blooded with the exception of species in the Lamnidae (such as white sharks) and Alopiidae (such as thresher sharks) families, which is partially warm blooded. While technically they are still cold blooded, they are able to produce warm blood from their red muscles. While the pyjama catsharks red muscles are on the flank of the body, just underneath the skin, Lamnidae and Alopiidae have their red muscle deeper into the body. They use a counter-current heat exchange to make sure as much heat leaving the muscles is recaptured by the blood vessels going back into the muscle and that the heat doesn’t escape into the surrounding water. Not only does this keep their muscles warm and higher than the surrounding cold water, but it also warms up parts of other organs by having the warm blood vessels envelop them, allowing for a more effective physiology. We could see the red muscle inside the pyjama catshark! We also discussed the liver, the heart, the vertebrae, and other internal organs. The liver is a very important organ in the body, taking up about thirty percent of the body and helps with buoyancy and. We learned about the seven different senses the shark has  — the same five as humans, and in addition they have electroreceptors (the Ampullae of Lorenzini) which helps feel heartbeats of prey, and lateral lines which gives sensitivity to pressure around the shark.

That day was unforgettable, not just because of the smell, but we were able to learn and see with our own eyes. It was an awesome experience and I would recommend it for anyone who is looking to go into marine biology, even if the interest is not primarily sharks.

Allison is a Marine Biology graduate from the United States