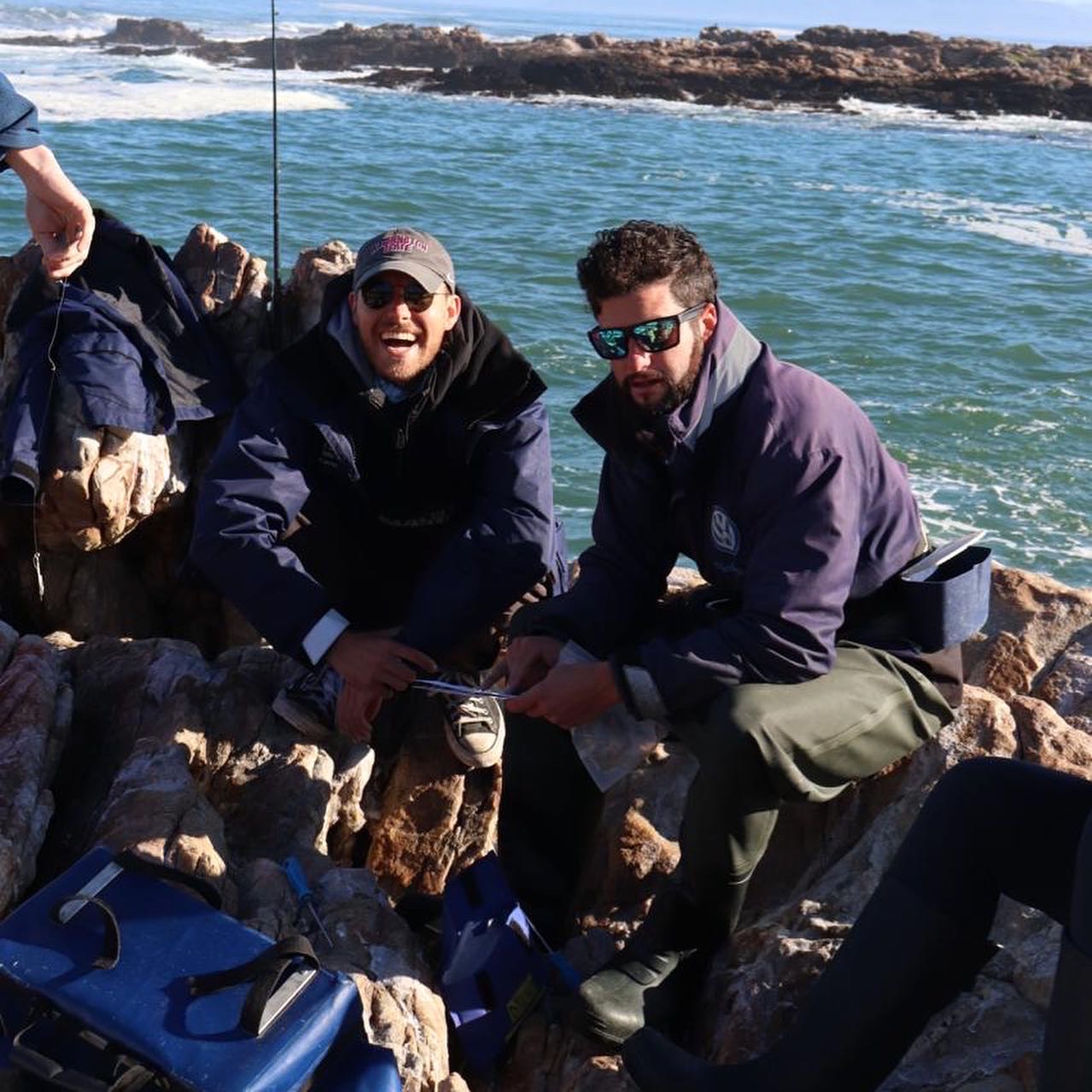 "And at the moment I least expected it, a mighty shark suddenly hung from the end of my line..."

On May 9, 2022, I had an experience that was unique for me. For many who have been working in marine biology for a long time, this experience will probably not be anything spectacular, but for me, as a German potato, it was fantastic. That day I went fishing for the first time in my life! And yes, of course, you can fish in Germany too… But we were fishing for catsharks! I.e. pyjama and leopard catsharks, and tag them with an ORI tag.

So we set out in the morning to find the best fishing spot at De Kelders, a nice rocky area of Gansbaai where they knew we could catch some catsharks. After a short walk, we reached the rocky cliff to be our fishing spot.

Of course, I had no idea about fishing, so my fishing mentor Etienne had to teach me all the basics up to the finer details of the art of fishing. Like a good student, I tried to absorb everything. In the beginning, the most critical task was assembling the fishing rod so far that a fish could even get into the embarrassment of biting. The trickiest thing was to form the correct knots with the thin fishing line, which sometimes strained my nerves. However, I became better from time to time. The most fun part was then, in the end, attaching the bait to the rod. Unfortunately, to this day, I cannot say that I find the smell of fish on my hands desirable. 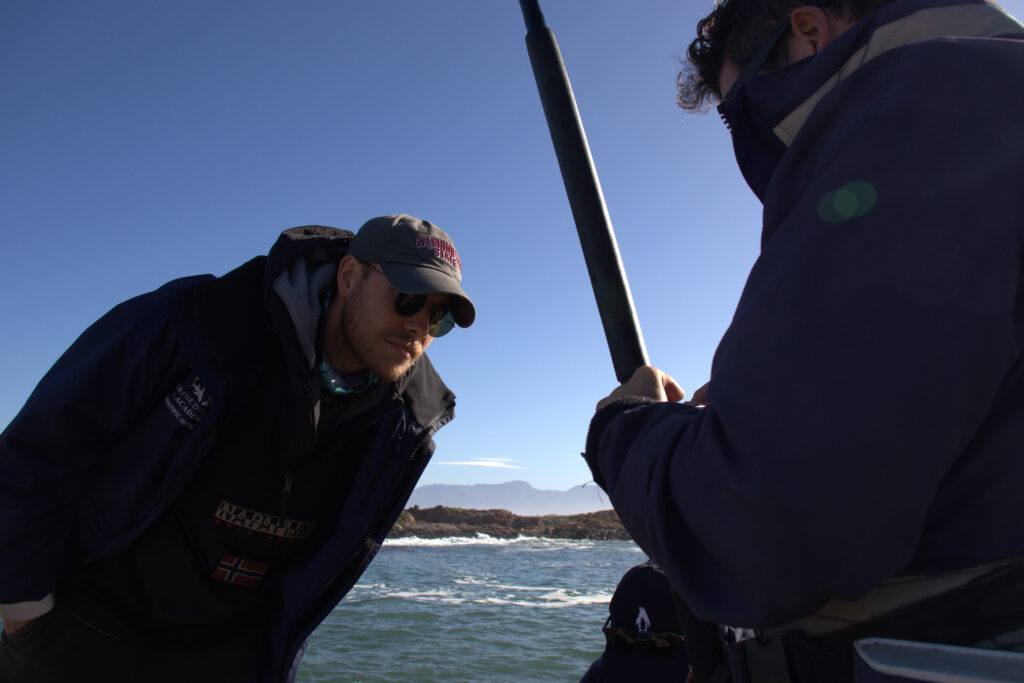 After the preparations were completed, it became serious. So I threw out the fishing rod for the first time, and to be honest, it worked out pretty well. Natural talent.

And indeed, shortly after I cast the line, I felt the first small bites on the other end of the fishing line. In the beginning, I was worried I wouldn’t notice when something was biting, but actually, you could feel it pretty distinctly. So I tried to strike as soon as I felt something and pull the giant shark ashore. Of course, that didn’t work. I was much too impatient. So I tried to stay more patient. First, I let the fish nibble, and as soon as the fish had the bait in its mouth and wanted to swim away with it, which was noticeable by a stronger and longer-lasting pull on the fishing line, I struck. Nevertheless, I had no luck at first or finally too little experience to catch a fish. 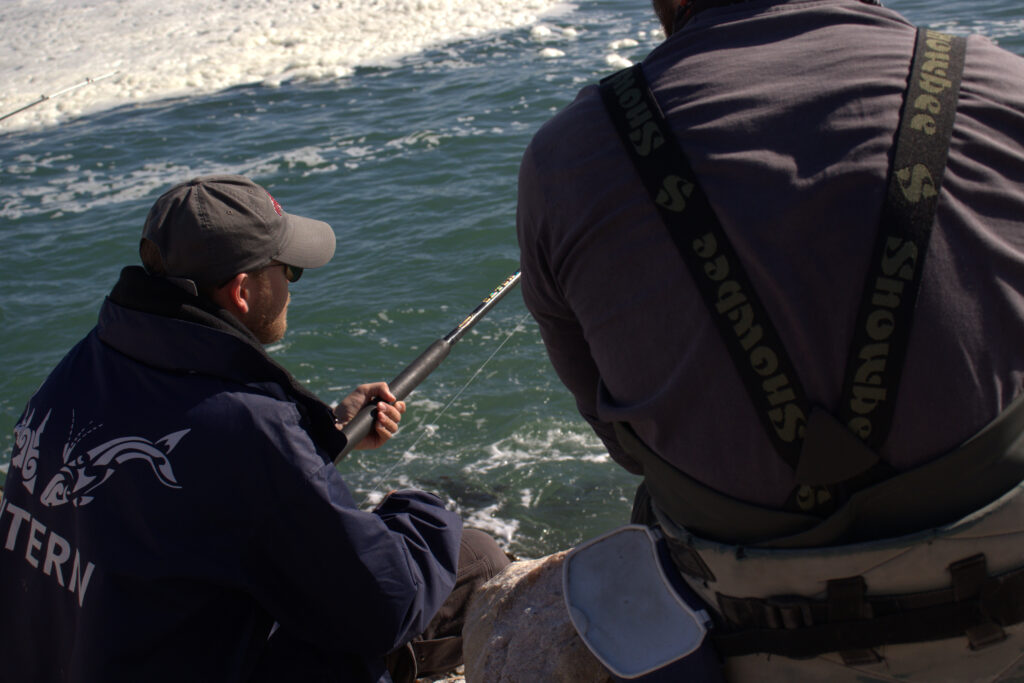 When I had almost given up hope, it happened: I just wanted to see if my bait had already been completely snapped up. And at the moment I least expected it, a mighty shark suddenly hung from the end of my line…okay, I admit. It was a Puffadder shy shark, a smaller, not quite 30 cm long, catshark that was not on our target list. And obviously, this catch was absolute luck and had nothing to do with skill.

Nevertheless, I had caught my very first fish. And this fish was also a shark. Pretty cool, if you ask me!

Afterward, we determined its sex, measured it, and took photos. Unfortunately, it was the wrong species and much too small, so I let the little shark go home without an ORI tag. Since that day, we have been catshark fishing more often, and I have also caught other individuals. I enjoyed the whole fishing thing so much that I registered directly for a fishing license in Germany.

Franz is currently studying biology at the University of Cologne.