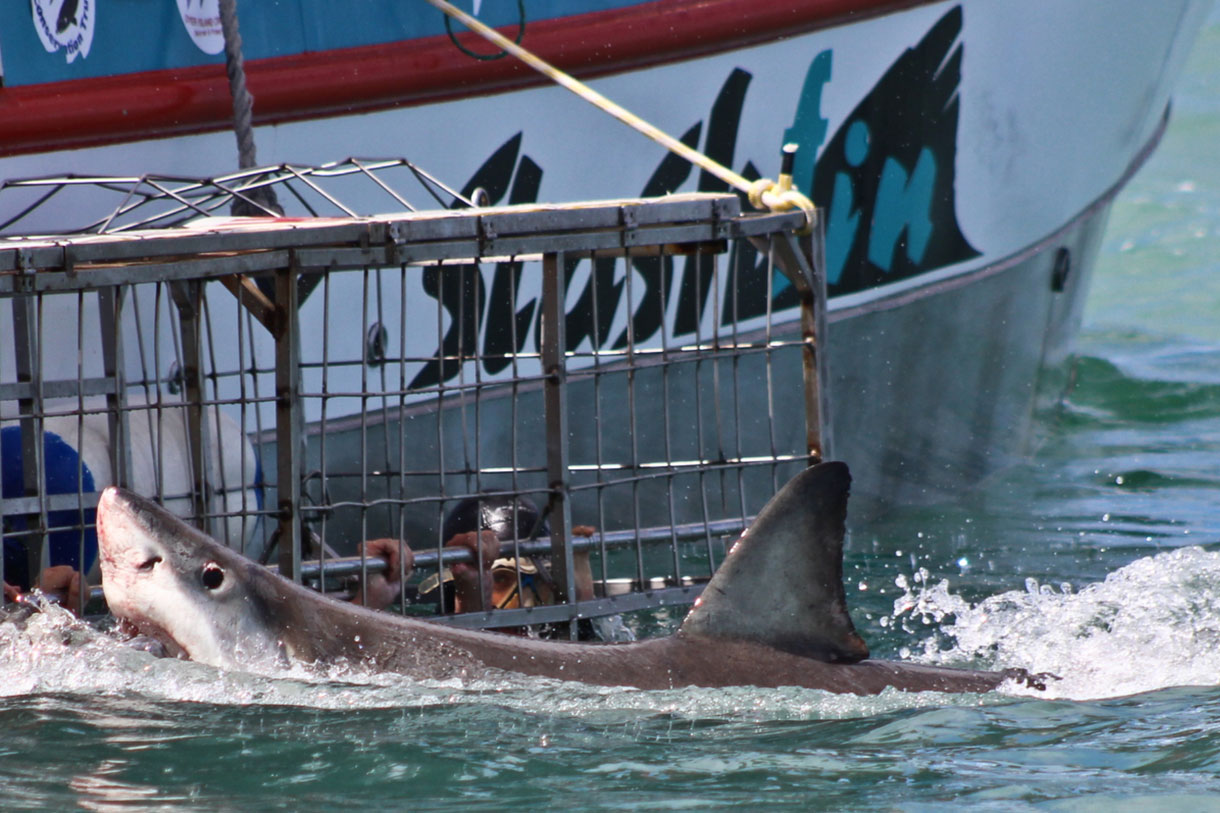 This was a great opportunity to learn some guiding whilst also helping the crew out before, during and after each trip; with tasks such as dressing of clients in life jackets and orange jackets and then animal spotting whilst on-board.

So with baited breathe and excitement we headed out to sea on Wednesday and Thursday; with all three interns aboard Dream catcher on Wednesday and then Emma and I on Dream Catcher and Danielle on Slashfin on Thursday. The trips did not disappoint and over the course of the two days we were all able to see all of the Marine Big 5 (whales, dolphins, seals, sharks and penguins) as well as some beautiful cloud

formations whilst travelling through the bay. On the Thursday Dream Catcher we saw more than 5 different Humpback whales, including a magnificent breach from one, as well as a pod of more than 20 Humpback dolphins, with a Cape fur seal and a Common dolphin in the pod as well; it was one of my best trips ever!

As interns, one of our main responsibilities is to educate the volunteers here as part of the International Marine Volunteers programme. Whilst on board Dream Catcher this week I was able to show the volunteers how to collect data and how to do a YSI water reading and what this all means. We collect data such as species seen, GPS coordinates, number of individuals and time of every animal sighting we encounter whilst on board the boat. The YSI collects data on the water temperature, pressure and dissolved oxygen levels within the seawater.

We take two YSI readings whilst on board, one in Uilenkraalsmond and then one in shark alley, and I was able to guide the volunteers on how to take the measurements and record the data correctly and accurately. This data can then be used to learn more about the animals and the Dyer Island ecosystem itself and give the company an insight into how to protect this fragile environment.

Now back to Emma to conclude the week…

Time for a beach cleanup!

As we approached the end of our week, on Friday we went with the volunteers out in force to the beach at Uilkraalsmond Nature Reserve for a much needed beach clean. After stormy conditions earlier in the week quite some debris had been washed up. While most of it was kelp, rubbish was if course also brought with it.

We collected 8 bags worth of rubbish from this stretch of beach, including a pair of goggles, a snorkel mouthpiece, and a rather tattered hat. One of the Dyer Island Conservation Trusts projects is placing fishing line bins in frequently fished areas. The reason why was obvious as we walked down the beach collecting 2 large bags full of fishing line.

Why is it important to clean our beaches?

Beach clean-up are an important part of conservation efforts as much of the rubbish is plastic which, if not taken out of the system, can remain in the ocean for hundreds of years. Fishing line is estimated to take 600 years to break down when in the sea. Not only is the debris unsightly, it can also be deadly for marine animals. Many marine species accidently

ingest plastics, mistaking them for food, in particular species such as turtles and ocean sunfish that eat jellyfish are at risk as plastic bags and jellyfish don’t look all that different in the ocean. Meredith Thornton, Cetacean biologist, did a necropsy of a dolphin in Cape Town and found a plastic takeaway cup lodged in its throat so it couldn’t feed. Old animals often have plastic in their stomachs, probably due to having worn down teeth meaning they can’t feed normally anymore.

As well as ingesting plastics, there are also frequent issues all over the world with entanglement of seals, dolphins, and seabirds which become trapped in fishing nets or monofilament lines. This can have negative effects on their ability to move, interact with other individuals, and feed. In addition, it can also have more immediate effect of strangling or drowning animals.

On my first trip to Marine Dynamics as a volunteer, I saw a seal pup on Geyser Rock wrapped in a fishing net. I also saw a gull which frequented Slashfin that had fishing line tied around its leg. Even in this beautiful environment, there are still issues with rubbish. Marine Dynamics doesn’t just sit and watch though; where possible the animal is freed from the entanglement. The crew on Slashfin has even successfully disentangled White Sharks!

So while a beach clean-up may seem trivial and a small thing, removing that piece of fishing line or rope could be saving the life of an ocean inhabitant.

Learning how to be a wildlife guide

On a lighter note, the next day (Saturday) involved a talk by Jax, Whale-Boat/Eco-Tour Guide, about how to be a successful guide. While this is a science based internship, it is important to learn how to express your knowledge to non-scientists in a way that is exciting and engaging.

Tourism essentially funds the research done at Marine Dynamics so it is absolutely vital that clients who join our trips have the best possible experience. Jax gave us tips on how to keep clients safe on the boat and remaining in control of them, without being brash or seeming too controlling. She explained all the preparation that goes on behind the scenes before every trip, and also the most important points of the pre-boat briefing that is given to the clients.

This talk was incredibly helpful at reminding us that how we put across our knowledge is essential to teaching other people the importance of our conservation work.

This has been another exciting week in Kleinbaai and we look forward to seeing what is in store for us in our final week. We also look forward to being joined by new intern Yannick on Monday who is also a returning volunteer. Welcome to the intern team!