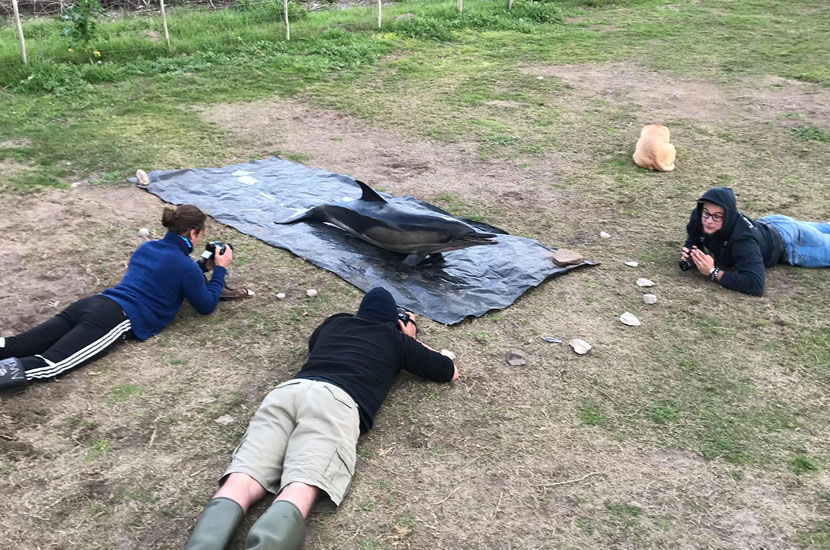 This week started with photogrammetry

We started the third week of the internship with an introduction to photogrammetry with Toby at the lodge. Last week, the Dyer Island Conservation found a dead male common dolphin in the sea with no signs of external damage. Photogrammetry is a method used to scan a 3D object by taking thousands of photographs of it (in this case, the dolphin in question). These photographs are taken from many different angles, several hundred in total to ensure full coverage is captured. We then import these into a program called Reality Capture, to generate the 3D image.

Photogrammetry is also a rather time-consuming task, which Duncan, Yannick and I got to experience first-hand. It took about 3 and a half hours to get all the required photos, which have now been submitted for 3D processing.

After that, we had a couple of hours to spare so Ettiene brought us to a place on the way to Birkenhead for fishing and tagging small shark species, though unfortunately we enjoyed no luck this time!

But that’s part and parcel of working with nature. The beauty is we can’t control it and even on the days when we’re not successful, we learn and discover so much.

After a couple of hours of fishing we had our routine shopping tour at Spar and the day was done!

Today we were on Lwazi again to deploy two more BRUVS! One of them by Dyer island to check for the presence of white sharks and the other in the notorious washing machine to gather more data. While waiting for the BRUV pickup we went chumming to see if further sharks could be attracted.

With Ettiene as skipper and Francois on board we had a really enjoyable time, sadly though no sharks paid us a visit.

Both BRUVS seemed to be successfully recording when we picked them up a couple of hours later, but then something strange happened; the second BRUV was bent near the bait canister and the lid was gone!

Everybody started discussing theories of what could have happened, but what we all concluded was most likely, was that this was the doing of a large GWS! No more could be further accomplished without looking at the footage, so we went chumming at another location while the weather conditions were excellent. Working to some music while we enjoyed the presence of the South African sun – not a bad day, at all!

As we returned to Kleinbaai harbour we decided to go to the lodge for taking the external measurements of the dolphin we photographed the day before. In the middle of the measuring Toby came back with the results from the BRUV footage…. nothing, as the GoPro camera had only recorded five minutes on the bottom. Extremely disappointed that we were never going to find out what happened, but these things can happen and we discussed some processes to be undertaken to minimise the changes of such problems occurring again.

Tonight, was also Braai night – a special highlight of the week!

Wednesday started with an early rise for all of us, though did we go different ways as half of the interns went onto a pelagic dive with Blue Sharks and Mako Sharks.

Duncan, Shanell and myself stayed in Kleinbaai and helped on the two Dream Catcher trips that went out. The first trip started smoothly as we headed to Dangerpoint Lighthouse and not a single wave breaking on the Birkenhead Rock. After cruising around for a while with two super relaxed Humpback Whales we decided to drive to Dyer Island. As we did we were blessed with a pod of Common Dolphins that approached us and combined with crystal clear water, gave us an amazing experience. They were swimming jumping and bail riding right next to us!

The second trip offered us a different kind of amazing sighting, as we drove out we spotted a breaching Humpback Whale in the distance. With the water and wind being absolutely still we were able to hear the sound of it hitting the water surface from far away and we were stunned by the sound as soon as we got closer.

After fulfilling all our duties on an after the boat, those being for example to wash the boat we went home and had a relaxed evening exchanging stories of the day.