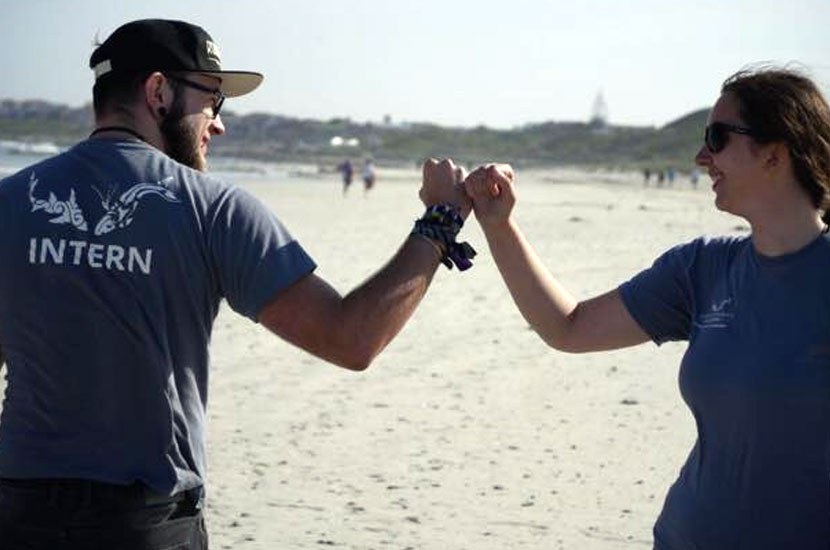 Photography lessons! Cameras charged and memory cards emptied, we headed out to the estuary and treated ourselves to some scenic landscape pictures. With the sunrise about to happen, we waited and were fascinated by how the lighting gradually changed. This affected the landscape and clouds around it, so thereforw made us change the settings on our cameras accordingly.

After a small coffee break at the Great White House we drove out close to Danger Point lighthouse. The tide was high and therefor covered most of the beach and rocks around, pushing all the birds around there onto a small piece of land. With them close by it was easier to take closeup pictures but therefor also easier to scare the birds so we had to be careful when approaching them.

After photography practice, we got our diving gear ready and grabbed our tagging kit as we were about to set out for some snorkelling and shyshark tagging. At De Kelders, we put on wetsuits and weightbelts and headed down to the water – snorkel time!

With 5 interns diving we split into teams of two (ours was Team Emma and Yannick!) and set out with Hennie O. with a bait canister to try our luck and find ourselves some taggable sharks. As luck had it, we didn’t find any Leopard Shysharks but we did find sharks that were already tagged! This is even less probable and immediately 4 of them showed up! We took measurements and wrote down the tag number to see who had already once caught these guys.

After we had rotated through pour teams we headed back to the Great White House to wash our gear and dropped it of at the IMW lodge after.

As the life of an intern sometimes has it, todays plans were to stay inside and catch up with all the different kind of tasks we still needed to complete before leaving the internship. We introduced Shanell and Lauren to BRUV data analysis, Emma was working on Humpback Dolphin dorsal fin IDs and we rotated through editing our pictures of the previous last weeks. After a busy morning we went to have dinner at the Great White House and later sat down to get some more work done.

With Dream Catcher launching at 10:00, Emma Shanell and I went down to the Great White House at 8:00 to prepare everything for the trip, getting datasheets, camera, life and orange jackets ready. Heading to the Shallows immediately after launch we were able to show our clients a Great White Shark at our sister company Marine Dynamics. Cruising towards Pearly Beach and later towards Dyer Island we spotted a lot of different Southern Right Whales, their numbers increasing steadily as the Whale season has now started. All of them were in mating groups, actively playing around and giving us a great experience.

Just back at the GWH, Hennie O. picked Emma Shanell, some volunteers and me up to go for a “Beach Comb”, where we were looking for shark egg cases. While out on the beach we did not only find a lot of these cases but also an incredible amount of fishing line thrown away by fishermen. We found a particularly long line tied and knotted around a large piece of kelp and proceeded to cut it out to throw it into one of our Fishing line Bins. With teamwork and a good swiss army knife we eventually succeeded in getting all out of the entangled kelp.

Back at the GWH we gave the vols a hand with washing the wetsuits and later went back to our house to have a rest after the long day and get some more work done.