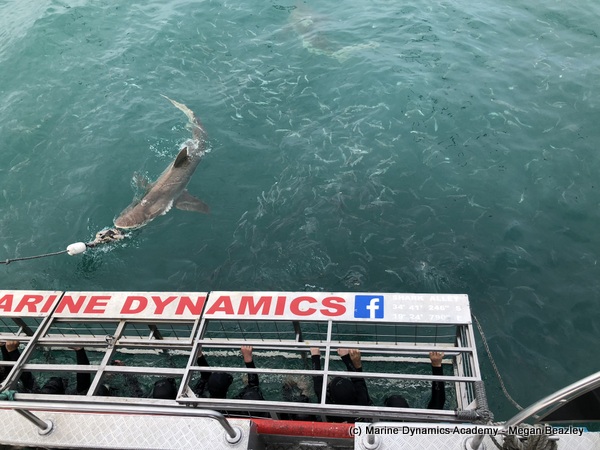 Firstly we'll start off with the bigger guys

I started Marine Dynamic’s Scientific Internship on October 1, 2018. I arrived and was directed to get ready for the next shark cage diving trip, so I could experience it as a passenger before becoming a crew member. I jumped in the cage as soon as I had my wetsuit on, and almost immediately a bronze whaler shark swam right in front of me! It was amazing seeing these animals in their natural habitat; the five individuals that visited during the trip were very lively and actively went after the tuna head bait as they cruised around the cage.

Bronze whaler sharks get their name from their brown coloration and their history of gathering around whales harpooned by whaling vessels. This temperature species of shark is usually found in waters deeper than 100m around the coasts of South Africa, Australia, and New Zealand. They can grow to over 3m, and their prey includes tuna, sardines, squid, octopus, dogfish sharks, and stingrays! Bronze whalers are viviparous, which means they give live birth, and females will swim inshore every two years to give birth to a litter of 7-24 pups. However, it takes males 13-19 years and females 20 years to become sexually mature, and they listed as “Near Threatened” by the IUCN due to their low reproductive rates. Threats facing these sharks include being caught as bycatch in longline fisheries and recreational fisherman catching juveniles inshore.

While bigger species of sharks like the bronze whaler are what people come to see, there are also smaller species of sharks that reside in the coastal waters of Gansbaai. These species include the dark shyshark, puffadder shyshark, pyjama catshark, and leopard catshark. Part of my internship is learning how to catch and tag these sharks. Ettiene, the technical lead at Marine Dynamics and an experienced fisherman and tagger, took us out to the rocky shore of Danger Point on Thursday to teach me the basics of fishing and the procedure of tagging small sharks with ORI tags. ORI tagging utilizes citizen scientists to gather data from their fishing catch by measuring, tagging, and recording recapture of tagged fish species in order to better understand a species’ population numbers, growth and mortality rates, and habitat use. 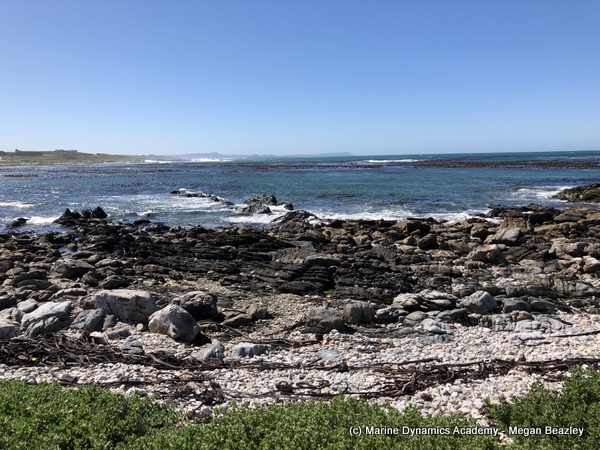 I did not manage to catch a shark on my first outing, but Ettiene brought in a 49cm dark shyshark. Shysharks get their name because they curl up into a ball when they feel threatened. This little guy squirmed a bit when we brought him in, but he was fairly docile once we got him on the sling to measure him. Measuring sharks helps us approximate their growth rates and age. We knew it was a “he” because we saw claspers when we turned him over; claspers are two cylindrically shaped rods by the base of the tail that are used to deliver sperm to the female during reproduction.  We didn’t tag him because dark shysharks are abundant and listed as “Least Concern” by the IUCN. He was released gently into the ocean as soon as we were done. 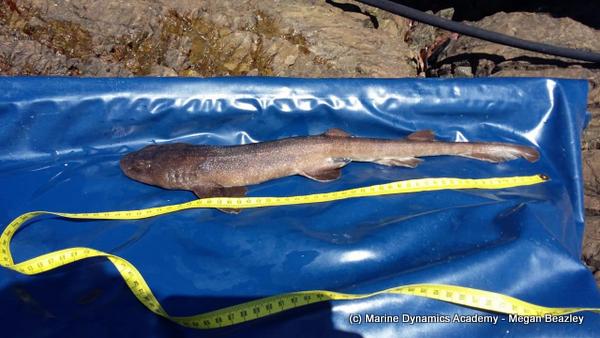 Dark shysharks can be found on the bottom of shallow inshore kelp forest and rocky reef habitats around the coast of South Africa and Namibia. They are endemic here; they can only be found in this region. Their maximum size is 60cm, and they feed on small fish, octopus, squid, and crustaceans. These sharks are oviparous, meaning they lay egg cases. They will lay one egg at a time and can breed year-round. The biggest threat to dark shysharks is recreational fisherman who will catch and kill them because they are considered a “pest” species.

I am looking forward to learning much more in the coming weeks about the different species of sharks found around Gansbaai and the techniques used to study these awesome animals!