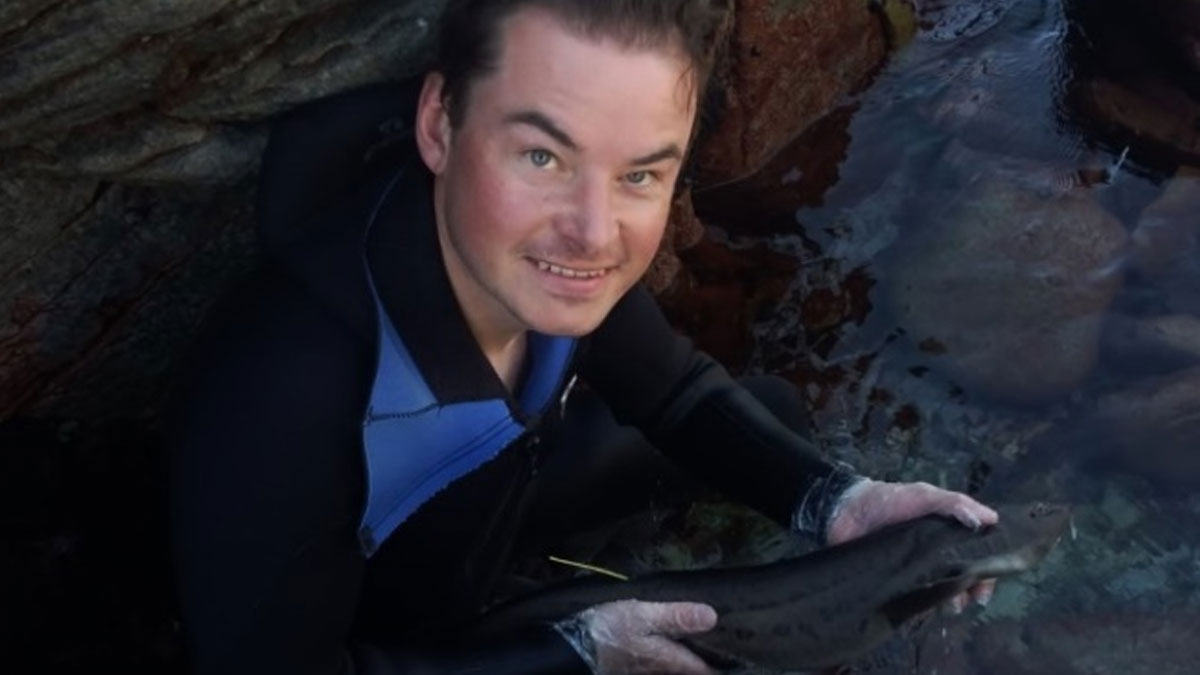 Time to find some sharks!

On Wednesday we went to a patch of coast called De Kelders, where rocky shore meets kelp forest, for a morning of snorkelling and small shark tagging. This environment is ideal for benthic sharks, such as the Pyjama Catshark and Leopard Catshark. These two species are of particular interest when it comes to ORI tagging so our aim for the session was to catch individuals of either species and tag them. Preparing for snorkelling means gathering wetsuits (7mm thick for that chilly water!), snorkels, masks, weight belts, flippers and gloves. We also brought a BCD (buoyancy control device), regulator, scuba tank that we would use to stay underwater for longer to better catch the sharks.

After parking, we got into our wetsuits and prepared to carry all the snorkelling and tagging equipment down to the snorkel site. However while we were changing we were treated to the view of a Southern Right Whale just off the coast. A perfect way to start the day! At the location, we set up our tagging station with the shark sling and tagging kit then got straight in. So that we could each have a chance to practice snorkelling and tagging we rotated with two people in the water at a time, one catching and one watching, and one person tagging. Being underwater in the kelp was like being in another world! With the help of the scuba gear, which we sank to the bottom, we could stay underwater for prolonged periods of time. This allowed plenty of time for us to pick out specific sharks to tag and also appreciate the beautiful surroundings. With tall kelp all around creating a dense forest, rocky reefs, and a sea floor covered in purple and red sea urchins, it’s not hard to see why it’s so popular with the small sharks!

What did we catch?

Overall we caught and tagged 4 sharks. All four were Leopard Catsharks which is particularly helpful as some things about the species are unknown due to being data deficient. Hopefully our tagged sharks will be recaptures as this will contribute to the data collection of sizes, growth rates, and population estimates. As well as the Leopard cat sharks we saw two other species of benthic sharks, the Dark Shyshark and the Puffadder Shyshark, plus some other fish such as Klipfish and Hagfish.

Just before leaving to go back to the van we had the most surprising sight… A breaching Humpback whale! We watched it as we walked up the coastal path and enjoyed the amazing sight of it breaching multiple times. If seeing so many benthic sharks wasn’t good enough, both starting and ending the trip with whales certainly made our day!